This reading, Behukosai – “In My Statutes” – details the results to be expected from following Torah principles.  And from violating them.  Make those principles our guide, we will read, and we can relish the joys of peace and prosperity.  We will even read about future victories, that if we must go to war “five of you will chase a hundred enemies, and a hundred of you will chase a thousand.  Your enemies will fall before you.”  Speaking in G-d’s name, the Torah predicts: “I will walk among you, and you will be my people.”

But then we will also read about the reverse effects. If we forget about our mutual concern, despise the Mitzvos, exploit the land and each other?  Then “I will let your cities be ruined, and your holy places destroyed…”   This full list of curses, called the tokhakha, goes on and on – and is a mere preview of the list in Deuteronomy.  Both lists hardly anticipate our history.

Considered from the vantage point of the 20thand 21stcenturies, we can draw a distinct parallel.

The Six Day War of 1967 brought a miracle to Israel and to World Jewry.  We thought that the miracle was military victory. What it really was, was the spirit of national unity that made victory possible.  Secular kibbutzniks and religious yeshiva students joined forces to defeat their smug enemies.  But they all served under assorted leadership.   During the battle for Jerusalem, General Motta Gur radioed headquarters with a historic 3-word message: Har habayit b’yadeynu – “The Temple Mount is in our hands!”  And a single soldier climbed the Dome of the Rock and attached an Israeli flag, signaling Jewish return to the holy hilltop after 19 centuries.  But no less a hero than Moshe Dayan ordered it taken down.  By the following week, national unity began to dissolve.

Over the succeeding decades, appeasement groups appeared within our communities both in Israel and worldwide, Jewish pressure on the left.  And we see opposing efforts on the right, supporting Israeli power.  Neither national unity nor Torah principles can prevail.  From the Middle East to the committees of the UN, enemies threaten the Jewish future. Do we have something to learn?  Definitely.

In the very last chapter of Leviticus, we will review the laws about how each individual participates in the work of the Sanctuary, by contributing the value of his labor – his own, and that of other members of his family, including males, females, adults and children.  When the contribution of sacred work is made economically rather than physically, the value of an individual is stated in an amount of shekels, and a fifth of that amount is added.  The additional 20% covers the cost of hiring someone outside the citizen’s family to do the job.  Supporting the community as detailed here is not a matter of voluntary charity.  It is a sacred duty, one of the tithes that are every citizen’s responsibility. Biblical statutes built a nation.

Some ancient problems keep happening, don’t they? Solving those problems challenges us in our generation.  We must learn from the past.

This reading completes this year’s review of Leviticus – the book of priestly statutes.  Next comes the Book of Numbers, in Hebrew called Bamidbor – “In the desert.”  In many ways, that’s where we are.   We need to find our way out of this religious and historic desert where we find ourselves.   This reading offers us one strong guide:  Help each other; remember that we are one people. 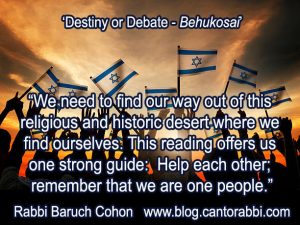