By far the most famous words in this week’s Torah reading are the ones from Chapter 25 verse 10, which are engraved on the Liberty Bell: “Proclaim liberty throughout the land to all its inhabitants.” Certainly an inspiring message for a newly independent nation!   Actually, in their original context, they do not mandate anything political at all.

As we read this section, we see a society that is first of all agricultural and secondly hereditary.  Once Joshua conquered the country, each family’s property was established, and was intended to remain that way permanently.  No family farm could be legally pulled away from its ancestral owners.  If one owner fell into debt for any reason, he could sell his crop to a wealthier tribesman, who would then operate his farm – but only until the next Jubilee year.  And the Jubilee comes every 50 years, so if the farm is “sold” in year 30, the sale is only good for 20 years.  So it is mandated in this reading.

Similarly, if a poor Jew in ancient Israel sold himself into indentured servitude, his master had to release him when the Jubilee year rolled around.

The Hertz commentary points out that these laws helped prevent the land and the people from becoming subservient to a privileged class.  Less debt means more equality.  The Torah does not state that, but it is worth considering.

In the previous section, we were instructed to count days.   7 days times 7 weeks for the time between Passover and Shavuot, which occurs on the 50thday.  Now we get a parallel instruction to count years.  Every 7thyear is a Sabbatical, a year off for the land – too bad the land cannot spend that year in Hawaii – but after 7 Sabbatical years comes the Jubilee, which means no planting and no reaping for two full years, the 49thand the 50th.   In this connection, the Torah promises a blessing on the 6thyear of that cycle – effectively year #48 – that will see the land producing enough to feed its owners for 3 years.  During the Jubilee year, says the Torah, you don’t need to work the land or bring in a harvest.  Just “eat from the field.”  Any field, whether it is legally yours or not.  Questions about this custom abound.  Did our ancestors really observe it?  After all, the limitation on transfer of property only applied to agricultural property.  A house in a walled city could be sold permanently.   In Israel today, shmitah produce – what grows during the Sabbatical years – is banned for religious people, and you see labels that declare “not made with Shmitah ingredients.”   Jubilee years present an even greater problem.

And now back to the Liberty Bell.  We are instructed to announce the Jubilee year on Yom Kippur by sounding the Shofar.  Why then? After all, the year started on Rosh Hashanah, 10 days earlier.  And what kind of liberty are we proclaiming?

The sage Rabbi Isaac Abarbanel compared the Day of Atonement to the day Israel received the Torah.  Just as accepting the Torah could free the people from the Evil Urge and its punishments, so Yom Kippur is the day of freedom from that old foolish vengeful enemy king called Satan, who is the Evil Urge, and all this is to remind each of us to keep the Day of Freedom always before our eyes.

What is our kind of liberty?  No longer a year just to eat what we find because we must not grow crops.  It is, this year and every year, individually and collectively, the vision of freedom from evil.  And Yom Kippur will be the perfect day to proclaim it.  Let that T’kiah g’dolah at the end of next Yom Kippur remind us: every year can be our spiritual Jubilee.

A little further along, in the classic translation of Chapter 25 verse 35 we read: “If your brother be waxen poor…” Waxen poor???  Like a bad face job?  No, that is the accepted Elizabethan English for the Hebrew word yamukh,which means a personal or economic downfall.   More about yamukh later.  What we can learn initially from this section is how to treat that brother.

First the Torah tells us that if this poor loser comes to you for help, you are to strengthen him.  If he is a native Jew, or a convert or, as Ibn Ezra includes, a resident alien, let him live.  Help him live.  Don’t let him starve.  The Hertz commentary points out that no other society had such rules.   Not only in the days of the Torah over 3,000 years ago, but right up to the Roman emperor Constantine who instituted poor-relief in the year 315.   Even Constantine’s legislation was repealed by Justinian a couple of centuries later.  And notice that the Torah directs this rule to the individual, not the state.  This is not a “stimulus package.”  It is an Israelite’s duty to save a neighbor.

Secondly, we will read that we are not to take interest or usury from him.  Yes, he needs a loan.  He needs money to feed himself and his family.  He needs money to start over, to get back on his feet.  If I want to charge him interest, don’t I have a right to it?  No, says the Torah.  “Revere G-d, and let your brother live with you.”  Don’t try to profit from his loss.  Both in Biblical and Rabbinic law, a fine line separates legitimate interest – neshekh —from exorbitant usury —tarbis.  Here both are prohibited.

Ever been to a Jewish Free Loan office?  Every Jewish community of any size has one.  In Los Angeles where I live, the JFL lends for economic and medical emergencies, or to help a small enterprise get started, and its borrowers are not all Jews either.  Of the thousands of loans on their books, they show a repayment record “in excess of 99%.”  Not a bad record.   That is Leviticus in action.

Now back to yamukh. Notice that the text specifies a downfall.  This current condition was not necessarily always there; this fellow was not always broke. Maybe he was once as successful as you are.  Maybe he just made some mistakes.   Maybe he got robbed or cheated.  Or maybe he is not very smart.  This is not a condition he planned.   No “entitlements” here.  He is out of luck and out of money.  Your job is to help him if you can.  Of course we can ask “what if this fellow makes a racket out of his poverty?  Do you still have to help him?”  A legitimate question to be sure.  The Book of Leviticus does not treat that possibility, but Talmudic justice would put it in the category of deceit.  We have commandments like “Do not deceive your neighbor or lie.”  Using the shelter of bankruptcy to take advantage of other people’s generosity is also a form of deceit.  Not worthy of help.

Here we are dealing with something more positive.  The valuable message of this reading is our personal responsibility to extend a helping hand in an emergency.   The Klee Yokor commentary discusses the definite prohibition on taking interest for your help in this situation.  Whatever you give this down-and-outer is not a business loan. By contrast, if a rich man asks you for money, go ahead and charge interest.  Says the Klee Yokor: “Whoever owns a business always looks for G-d’s help, because of the doubt: will he profit or not?” So he borrows money.  The lender also takes a risk, so he is entitled to charge interest. “But,” says the commentary,“seek out the meaning here. The basic purpose [of this ruling] is to forbid usury.”  Your unfortunate brother must not be your victim.                        “V’khai akhikha — Let your brother live.” 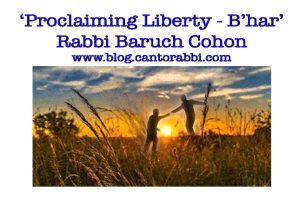