WHOSE DAY by Rabbi Baruch Cohon

If you’re reading this on Father’s Day, you might wonder where this holiday came from. Not the Bible, not the Constitution, not your parents’ marriage license. That’s for sure. Historically Mother’s Day antedates it by more than half a century. Reasons for that fact include the bitter truth that we always know who a child’s mother is. Not necessarily who the father is. Be that as it may, we’ve been raised to honor our mothers every year in May. If we are sincere about it, we extend that process. The woman who raised us has every right to our love, our care and our honor on Mothers Day, ever since the early 1900’s. Fathers Day became a US national holiday only in 1972. Why the delay?

Early 20th century fathers tended more often to be the ruling – and punishing — heads of households and families, rather than doting parents. If a child wore out a mother’s patience she would warn: “Wait till your father gets home.”

Interesting how neither of these family holidays is scheduled for a specific date. It’s the second Sunday in May or the third Sunday in June. Parents are expected to work, and a weekend day is free time. Even now, weekdays don’t qualify. It’s not 4th of July, not New Years Day, not Thanksgiving. Just a good occasion to brighten up a chosen Sunday.

Witnessing today’s widespread family problems, we may well wonder how those will affect these once-happy days. Certainly someone born of a single mother, someone who doesn’t even know a father’s name, someone whose parents were divorced, often re-married – none of the offspring can be condemned if they feel uncomfortable with Father’s Day.

So whose day is it? As a father of adult daughters and sons who do valuable work, gave me fine grandchildren, and have positive relations with other human beings, I want to give them preference. I have no doubt that other fathers have similar attitudes. These members of our younger generation made us what we are. Fathers Day belongs to them! 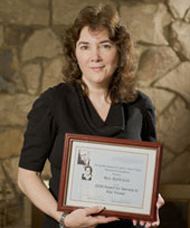 THE 3 D’s by Rabbi Baruch Cohon

From propaganda to violence, incidents of anti-Semitism sweep the globe.  Before, during and ever since the murderous Hamas attack on Israel, enemies slander both the Jewish state and the entire Jewish people.  From pro-Jihadi activists in the Middle East and elsewhere, from neo-Nazi gangsters whether in Potsdam or Pittsburgh, and from leftwing extremists in the US Congress, come a variety of false charges and defamations.  Violent crimes inevitably follow, as “demonstrators” attack pedestrians who just might happen to be wearing a skullcap.

Of course this is nothing new.  History of Jew-hatred repeats itself all through the centuries.  In the Middle East, Assyrians slaughtered ancient Israelites. 18th century Spain launched an Inquisition, expelling those Jews who did not get killed.  Russian pogroms murdered thousands, including my aunt and her husband and children in 1905.  Germany outdid the others with the 1940’s Holocaust. Only after that monumental attempted genocide was the re-established State of Israel able to provide some rescue and defense.

Defense is again called for.  Israel defended its people very well against the latest military attacks.  Then, the slanderers charged Jews with “war crimes” because of Arab civilians in Gaza who were killed by Hamas’ own rockets. Life and justice demand that we respond to the need for defense.

How does a loosely organized Jewish population in most countries deal with that need?  One substantial aid to Israel comes from organizations like Volunteers for Israel, some thousands of whose members spend months – in some cases every summer – working with IDF soldiers, packing supplies for them, relieving them of some barracks duties, getting them ready to go into action.  These volunteers come from many countries, speak a variety of languages enabling them to communicate with Israelis from assorted backgrounds, and do a valuable job.  Their president, Mark Werner, recently wrote a book about the 18 years he has engaged in this work. Other valued friends will be discussed here soon.

Besides helping Israel, of course, there’s a lot more to combating anti-Semitism. The schoolboy who is beaten in Paris, the pedestrian who is targeted and run over in New York, the lies that clog the airwaves – all call for action.

I see three kinds of action that could work. Defense is #1. Physical, social and political defense.

One requirement to support Defense in all its forms is Denial.  False charges must be disproved.  Make sure the truth is verified.

And also, the hateful accusers should be identified. Denounce them. That’s important too.  Expose and stop the hatred before it kills.

3 D’s can counter this hatred: Deny, Denounce and Defend.

Now is the time.

Of all the Mitzvot -– the commandments, duties, responsibilities — that Aaron had to fulfill as High Priest, the one that opens this reading is easily the most symbolic. Possibly also the most significant. Distinguishing its value in the very first line of this section, is the word that gives its name to the entire portion: B’haalot’kha – literally, “when you lift.”

What did Aaron lift? He lifted a 7-branch candlestick, known as the Menorah. In constant use ever since Aaron’s time, it now graces synagogues the world over, and its figure appears on documents and treasured jewelry, on buildings, products and stationery.

It also appears on an arch in Rome to symbolize Israel’s defeat. Capturing the Menorah made the Romans believe they had indeed ended the Jewish nation. How wrong they were.

What is so special about this candlestick? One distinction is the way it is made. This was not put together piece by piece, a base, then attach a shaft and six branches. This, we learned in the text of the Book of Exodus and elaborated by the Talmud and the commentators, was formed from one block of gold. “Of beaten work shall the candlestick be made. Its base, its shaft, its cups, its knobs and its flowers shall be part of it.” One block of gold, beaten into shape. Three branches extended on each side, and one in the center. And the cups were shaped so as to project the light forward, not just straight up. The Menorah should spread Divine light to the world.

Of course Aaron had to light those flames, but that was only part of the Mitzvah. The message he gets here does not say “when you kindle the flames,” it says “when you lift the flames.”

The 7 burning cups of the Menorah are shaped so that the flame does not burn just straight up, but also outward.  Spread the light.  Yes, it is for G-d, and it is also for people.  All people.

Our commentators note details about the cups on the Menorah that add to the visual engineering. Of the three cups on the east side, says Rashi, the two outer ones are angled just slightly so they all shine toward whoever is directly facing the middle light; and the same way on the west side. The innermost of the three on each side, and the center light, (number four if you count from either end) are not angled at all, but shine up and straight out.

From the various laws, observances and travel experiences we will read in these 5 chapters, and from the centuries of history that followed, we can learn something of the value of the light Aaron kindled, and raised. Our Menorah indeed shines upward toward Heaven, and forward on all who face it.

Did it shine on the group of tribesmen who missed the first Passover, and convinced Moses to get them the opportunity to celebrate their freedom a month later?  Of course it did.

Did it shine on Miriam when she spoke against her sister-in-law? Maybe it did, and maybe she wasn’t facing it. She got punished, and she atoned.  In effect, she turned around and accepted the light.

Our candlestick represents the light of Torah. Like the original Menorah of Aaron the High Priest, that light shines both upward and outward. When we accept it, it can light up our lives. 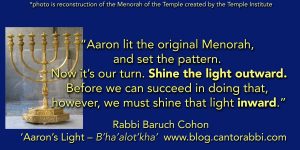 TRUMAN WAS MY GUY by Baruch J. Cohon

TRUMAN WAS MY GUY     by Baruch J. Cohon

Just 76 years ago this month, FDR died and vice-president Harry Truman was sworn in as the 33rd president.

I will always be proud to remember that my first vote back in 1948 helped re-elect Harry Truman.  As a World War II sailor, like all the other 18 and 19 year-old servicemen, I had the right to risk my life for my country but no right to vote till I turned 21.  So after returning to civilian life in ’46 I looked forward to that experience.  For other reasons too.

Looking back on the war, I saw the three heads of state who administered it.  Three contrasting figures: Truman the Missouri farmer, Churchill the aristocratic British officer, and Stalin the Soviet dictator.  And it was Truman who finished the job.  We are told that some of his advisers predicted that, compared to an invasion, the atom bomb could save 1 million American lives and 3 million in Japan.

As it turned out, I was one of those million.

That was 1945.  Germany surrendered in May.  The Navy minesweeper I served on was in the Aleutian Islands, where we had swept Jap minefields at Attu and US minefields at Kiska.  We were now crossing the Gulf of Alaska, heading for Dutch Harbor to be outfitted for the invasion of Paramashiru, which was the northernmost island in the Empire of Japan (now it belongs to Russia, but in ’45 Hirohito still had it).  In an invasion, a minesweeper would enter the harbor and sweep any mines away to clear a route for the landing craft.

While underway, of course, we listened to Armed Forces Radio.  We stopped at the island of Amchitka to draw “small stores,” and I can still feel myself standing in line outside a Quonset hut there waiting to draw a pair of shoes.

Suddenly every foghorn, every whistle, every klaxon on the ships in the harbor sounded off in unison.  No one had to tell us why.  My shipmates and I grabbed each other and jumped for joy – the bomb was dropped and the war was over!  We had every reason to celebrate.  We knew that the predictable life of a ship like ours was 80 mines.  Once you cut that many, by the law of averages you would likely hit one.  Then it would be Goodbye Charley.  By August of ’45, our ship had cut 78 mines.

I thank G-d for Harry Truman.  His historic decision saved my life.

I was not surprised when he desegregated the Armed Forces.   Nor when he welcomed Haim Weitzman and recognized the State of Israel.  He was that kind of leader.  I enjoyed a recent virtual visit to the Truman Historic Museum where a special display now evidences his firm relationships with Jewish figures, from Weitzman and Ben Gurion to his one-time business partner Eddie Jacobson.

Do you wonder how he would respond to the current murderous attacks on Israel, our one Middle Eastern ally?  No doubt about it.  Unlike our current administration, he would take action — definite positive action.

His heritage and his memory are a blessing to us all. We could use another one like him.