This week we will read several chapters in Jacob’s life, some wonderful and some very trying. A patriarch matures, discovers G-d, deals with the crafty father of his future wives, and starts building a family and a fortune – a fortune in sheep, that is.

Today let’s concentrate on the very first sentence of this week’s reading. Here is the action that starts Jacob on his way to become the direct father of the Jewish people:

Simple enough. Every trip begins with leaving town. Rashi asks a basic question, though: “All that was necessary to write was ‘he went to Haran.’ Why does [the Torah] mention his leaving [Be’er Sheva]?” Really, how else could he travel if he didn’t leave town? But, says Rashi, “this tells us that when a tzadik – a righteous man – leaves a city, it makes a deep impression. While he is in town, he is its fame, its light, its honor. When he departs, the fame and light and honor depart.”

Well, it didn’t all depart, did it? As the Midrash points out, Isaac and Rebecca still lived there. But Jacob’s effect was different. While Isaac’s blindness isolated him from other people, and Rebecca spent all her time caring for Isaac, Jacob interacted directly with his neighbors. That produced the three effects that Rashi mentions: Hadar – honor, as the residents of Be’er Sheva take pride in the fact that Jacob lives among them, Ziv – radiant light, a guiding force in human conduct, as the righteous one inspires others to do good deeds, and Hod – fame, as with the tzadik’s influence the city becomes known as a good place to live, a place where people treat each other well.

We might well search for a city in today’s world with such a reputation generated by just one of its residents.

In the case of Jacob’s city, its name has another significance. Be’er Sheva literally means “the well of seven,” but the word sheva can refer to either the number 7 or an “oath.” The name of the place comes from the story of Abraham and Avimelech, when they joined in an oath — a historic agreement about some wells, and Abraham sealed the oath with a sacrifice of 7 rams. The Midrash comments that those 7 also represent the number of generations that would pass before Abraham’s descendants could enter and possess their land. The Matnos Kehuna commentary notes that Isaac, too, made a similar treaty with the aging Avimelech, which then placed the entry to the Land of Israel at 7 generations after Isaac.

So why didn’t Jacob renew the treaty? Apparently Avimelech was still around. But Jacob took a different route. The Lubavitcher Rebbe describes the quality that set Jacob apart. Unlike his father and grandfather who each had two sons – one good and one bad – Jacob had 12 sons and a daughter, all good. Some of them made major mistakes, as we will see described in dramatic detail in the coming weeks. But they came around. They did their t’shuvah and lived to honor their father. The reason for that lies in Jacob’s character. Where Abraham and Isaac “did not win over the forces of evil but merely appeased them,” says the Rebbe, “Jacob had the ability to transform the forces of evil to become good.” He had no need to make a treaty with his enemy. Just as Abraham’s treaty delayed his descendants entering the Land for 7 generations after Abraham, and Isaac’s treaty added his own generation to the other 7, a third treaty with Avimelech would delay the entry to the Land for one more generation.

Accordingly, at the end of this week’s reading we find the angels of the Land of Israel coming to escort Jacob home. Back to Be’er Sheva. It was still his home. Some of us remember Be’er Sheva for its camel auctions, like the one I witnessed on my first trip to Israel. But in those Genesis days it was our patriarchs’ home, and Jacob came back.

Back, we must conclude, to the town he left. 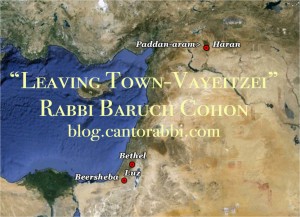