Torah law comes in three varieties.  One is called eydos – ordinances.  A second one is called khukim – decrees.  And the third is called mishpatim –judgments.

We define eydos  as rules of life that would be obvious without even writing them down.  Frequently they are compared to accepted customs that acquire the force of law.  Wearing clothes, for example.

Mishpatim are logical conclusions from reality, formalized into law. The word mishpat means “justice.” To be fair, to be just, we must follow these laws.  Like the Torah’s admonition that a murderer shall not be put to death until he stands trial.   Make sure we have the right one.

Khukim – decrees, or statutes, present a different challenge.  They seem to defy human intelligence.  Since this reading is called Khukas we have a perfect opportunity to explore some puzzling commandments.  One which opens our reading describes the sacrifice of the Red Heifer, an offering which has no stated purpose but is described in full detail.  The cow must be slaughtered and the body totally burned, with cedarwood, hyssop and scarlet cast into the burning body.  We are told that this offering took place only nine times in all Jewish history, and we still don’t know why.  But it is anticipated for the tenth (and last?) time when the Messiah arrives. Along with that sacrifice comes the law of tum’ah – contamination – applied to the priest who gathers the cow’s ashes.  He sprinkles the sacrifice with holy water, thus purifying it.  But he himself becomes contaminated – therefore unable to join in any normal activity – and remains so until nightfall.  So this is a case where the same action “purifies the contaminated, and contaminates the pure.”

Tum’ah becomes more serious when a human being comes in contact not with a dead animal but a dead human body.  Now it lasts a week.  And if the death takes place in a tent, or if the body is brought into the tent, everything in the tent is contaminated and must be sprinkled with cleansing water, as of course the living humans too.  In today’s Jewish world the mikvah (sacred bathhouse) substitutes for the ancient sprinkle.  Proximity to death still contaminates, so a modern Jewish cemetery will have water faucets available for visitors to use.  And returning from the funeral to enter a house of mourning, we prepare a pitcher and basin on the porch for our guests.

Yet the riddle remains.  How do we explain the concept of ritual contamination?  This law is not based on logic.  Don’t argue.  Just do it!

A decree or a statue, therefore, is a law passed down from above by absolute authority, whether human or Divine.   In Chapter 30 we will read: “These are the decrees that G-d commanded Moses.”  And later in the Book of Joshua we see how he signed a treaty with the people binding their agreement to dispose of all their idols, and ”made it a statute and a law.”

All through this chapter we will find the imminence and effect of losing treasured people.  First it is Miriam who dies.  We read simply that she dies and gets buried.  We don’t know who buried her, or what kind of mourning the people did. But we know they felt her loss. In her honor, says our Midrash, a miraculous well followed the Israelite people all through their 40 years in the desert.  As soon as she died, they had no water to drink.  That’s what they complained about.

Soon thereafter, they lose Aaron.  He and his son Elazar climb the mountain, he gives Elazar his priestly robe, and his life ends.  He is buried on the mountain, and the people mourn him for 30 days.

Why 30 days?  Significantly, we will read no law about 30 days of mourning.  Yet we still observe it.  Granted, when parents die, these 30 days are now just the first of 11 months of Kaddish, the memorial prayer. But the first month is the deepest, starting with the week of shiva when the mourners traditionally stay at home and refrain from work or other regular activities while they accept sympathy calls; and proceeding through the rest of the 30 days when it is customary not to visit the grave or to partake in entertainment.  Aaron was a great man in our history, but memorializing him took no different form from how we honor each of our departed ever since.  As we will read in Deuteronomy, Moses himself was also mourned by the entire people for 30 days.

We need these various kinds of laws – ordinances, judgments, decrees — to help us relate to each other.  They teach us to respect those who live by those laws, to support those who teach and enforce those laws and to share an ordered society.

Dealing with death is different.  No law we can write — or even understand — limits any one lifetime.  Human beings live and die by a decree we cannot know. All we can do for those we love while they are with us, is to help them live.  After that, we can honor good people’s memories as we have always done — from the heart.

The second chapter of this reading details the Israelite adventures — victorious, violent or miraculous – en route to the Promised Land.  Even before Aaron’s death they were denied permission to go through the land of Edom, and facing a powerful army they turned away. Now they face an attack from the Canaanite king of Arad, identified by our commentators as a descendant of Israel’s classic enemy Amalek.  Arad’s men take a prisoner – just one, say the commentators and that one a chambermaid. That’s enough to cause the Israelites to take a vow committing themselves to destroy Arad’s cities, which they do.

Then the detour they take, going around Edom, discourages many of the people, and they speak against G-d and Moses, protesting the decision to leave Egypt “only to die in the desert.”  They are attacked by snakes, in a Divine punishment for their disloyalty, and many of the people die.    But G-d responds to Moses’ prayer and provides a miracle to save the survivors. With Divine help, Moses makes a copper snake to be held on a pole.  If anyone is bitten they could look at that snake and live.

That miracle is perhaps no less to be expected than what follows in the stories of the Divinely created well that provided water to the entire thirsty nation, and then their successful campaigns against the forces of the Amorites and of Bashan.  Both of those kings tried to keep the Israelites out of their countries.  And when Moses had to face Og, the giant king of Bashan, G-d told him not to be afraid.  So we will read that Moses killed Og singlehanded.  And the reading concludes with Israel camped by the Jordan River, facing Jericho.

Progress toward a goal cannot be guaranteed.  It can be achieved in spite of our own doubts, our tendencies to give up. Unlikely as it may seem, our Torah narratives assure that it’s possible when G-d is with us. 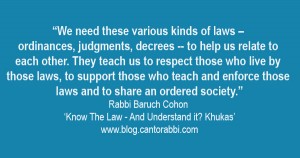