This section tells the story of a revolution.  A revolution that failed.  Not the first such revolt in Jewish history, it was nevertheless a threat to the leaders and the entire structure of the Israelite nation in the desert.  Its leader, a Levite named Korakh, got much closer to success than a recent would be revolutionary in our experience, one Bernie Sanders.  Unlike him, Korakh came to a dismal end, but he earned a place in history that lasted all these centuries.

Korakh and Moses shared a grandfather, namely Kehas, the oldest son of Levi, Jacob’s third son.  Also Korakh was wealthy, ambitious, and deeply jealous of his cousins Moses and Aaron.  Why should they be the Leader and the High Priest?  Why not he?  Setting out to displace them, he gathered support among other ambitious and impatient tribesmen – some 250 of them, in fact.  Included were not only fellow Levites but also three prominent members of the tribe of Reuben, who felt that as descendants of the oldest son of Jacob they should have the authority.  These 250 rebels are described in the Torah as anshey shem – well known people. They did not consider themselves the disinherited, or the proletariat, or the downtrodden.  These men already had some power.  And wanted more.

Who else joined them?  Their families.  Wives, children, other relatives, all followed the lead of Korakh and his fellow Levites.  First, they stage a protest.  Gathering together to face Moses and Aaron publicly, they voice their challenge: “Rav lokhem – Enough for you!  Aren’t we all holy people, with G-d among us?  Why do you lift yourselves up?”  In other words, do you have the right to be boss?  At this point, Moses falls on his face as if to express a desperate hope for Divine guidance.

After all, this is fourth in a series of rebellions of one kind or another.  Moses is out of patience.  “What is Aaron, that you murmur against him?” asks Moses.   He puts Korakh and company to a test.  Since they focus their rebellion on Aaron and the priesthood – as the religious symbol of authority – Moses uses tomorrow morning’s incense offering as the test.

It’s easy to see that pagan peoples also offered incense.  They had many idols, many altars, and hundreds of priests. The Israelites had one G-d, one altar, and one high priest.  And here come 250 men who all want to be high priests!  So, the Midrash explains, Moses offers Korakh an attractive test:  take the incense, the most prestigious of offerings. But bear in mind that this incense contains a deadly poison.  This is the offering that already caused the death of two of Aaron’s sons.  And recognize that Ho-ish asher yivkhar haShem hu hakadosh – “the one G-d chooses, he is the holy one.”  Take warning that one offering will be accepted, and all whose offerings are not accepted will die.  According to the Midrash, Korakh had advance knowledge that he would have important descendants, including the prophet Samuel, so he assumed that he would certainly be chosen.  He accepts Moses’ conditions.

Now Moses sends for two of the Reubenite rebels, Dathan and Aviram, to negotiate with them.  They refuse to come.  They are stubborn enough to follow Korakh’s lead.

Originally, we might note, there was a third Reubenite involved, named On ben Peles.  He is suddenly out of the story.  The Midrash supplies the reason: On ben Peles did not continue with the rebellion, did not participate in the trial by fire, and he survived.  Why?   Because his wife convinced him to break away from Korakh.  With a true Yiddish kop (“Jewish head!”), she points out that he would just be exchanging one boss, Moses, for another boss, Korakh.  What does he need that for?

Morning comes, and the firepans are brought to the Tabernacle. Aaron brings his offering and it is accepted.  Korakh and his followers approach, and suddenly fall into a huge crack in the ground – as if the earth opened its mouth “vativla osom v’es boteyhem —and swallowed them and their houses!”  All the people take flight, hearing their cries as they dropped living into the pit!

Impossible?  Couldn’t happen?  Or could it? Do we see it on TV today, when sinkholes suddenly open without warning?  Or when earthquakes crack and split the ground?  Perhaps the most picturesque comment on the story of Korakh is another story told by Rabbah bar bar Khonnoh, a rabbi in the Talmud, known for his tall tales.  He says: “I was travelling in the desert, and an Arab took me to a spot where there was a crack in the ground.  I bent down and put my ear to the crack.  And I heard the voices of Korakh and his followers, calling out: “Moses and his Torah are true, and we are liars!”

So that was the end of Korakh and his rebels.

But wait.  What about the prophet Samuel, who supposedly descended from Korakh?  And what about all the psalms that are assigned to the family of Korakh, and apparently they sang those psalms in Solomon’s Temple centuries later?

The answer to this dilemma comes in one sentence later in the Book of Numbers.  In Sedrah Pinkhas it simply says: Uv’ney Korakh lo meysu – “the children of Korakh did not die.”  So what happened to them?  They were there with their father, weren’t they?  In the Gemara Sanhedrin we find a teaching that they were reserved a special place in Gehinnom (Hell) where they sat and sang. To which the Tosfos commentary adds: “G-d prepared a high spot for them, so they would not go deep into Gehinnom, and they did not die.”  There they sat on a ledge, with the flames licking at their feet, singing psalms! As the Yiddish expression goes: Eykh mir a lebn – Some life!

But the important fact is: they survived.  All the fanciful legends surrounding the descendants of Korakh add up to a marvelous message.  Look at what his descendants lived to do:

As we can read in the Haftorah (the prophetic section accompanying this reading) Samuel the prophet crowned Saul the first king of Israel, and actually completed the organization of the loosely connected tribes into a single nation. And the Levitic family of Korakh became the doorkeepers of the Holy Temple.  They were responsible for eleven different psalms, singing of deeply felt religion – a thirst for G-d.  They sang of human friendship, of Zion and the Temple itself, and they sang about individual life and death.  They played instruments.  They danced. The women took part.  The Korakh family is repeatedly called Maskil – informed, competent, successful in their Levitic duties and their music.

All of this value from the family of the arch-rebel: Korakh, the rich ambitious envious rival of Moses and Aaron.  Korakh the man who lost his cause and his life because he challenged authority for the wrong reasons.  Selfish reasons.  Indeed his children did not die.  They lived, with difficulty at first, but they lived to prove their value for centuries to come.  They transcended Korakh’s mistakes.  They survived his failed rebellion.  They made a better choice.

The pattern of Korakh and his descendants happened more than once in our history.  In fact it is still happening.  Look around, and you find families – we all know one or more families like this – where one generation rebelled against their Jewish heritage, chose assimilation, or Communism, or secular Humanism – and became lost, swallowed up by the world. And then their children, or perhaps their grandchildren, grow up and rediscover their Jewish roots.  They find they enjoy brightening their table with Shabos candles… they find an intellectual excitement in learning Torah… they find great charm in Jewish music… they find a loving fulfillment in sharing Jewish ceremonies.   They find exactly what the rebel ancestors threw away – still there, speaking to them loud and clear, as if those rebel ancestors were calling out to them: “Moses and his Torah are true, and we were wrong!”

Sometimes it doesn’t take two generations.  Or even one.  Sometimes it happens in one lifetime.  Our Judaism can manage to survive all kinds of challenges.  Rebellion can sometimes be valuable too, because it strengthens us. We can only hope that any controversy it produces will be l’shem shomayim – an argument in the name of Heaven.  Then we have a chance to resolve it productively, for a Jewish future that can still sing our songs as the family of Korakh did. 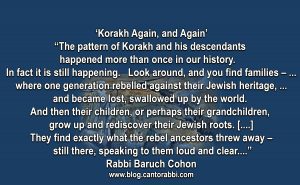