You see your friend riding a bicycle too close to the lane of a fast moving truck, what do you do?  You yell “Look out!”  Right?  But what if you lost your voice? Do you catch up with your friend and pull him away?

Such emergencies spice this Torah reading, in the story of the soothsayer from P’tor, known in Jewish tradition as Bil’am harasha – Balaam the wicked.

Why wicked?  Early in the story we might accept Balaam as a friend of Israel. After all, he declares his faith in the Jewish G-d, he apparently follows Divine orders, and he even gives Israel its most famous blessing in the words we repeat when we enter any synagogue: Mah tovu ohalekha Yaakov – “How goodly are your tents, Jacob.”

How does Balaam deserve the end he gets in Chapter 31 when the Israelites defeat the kings of Midian, and finding him there, “slay him with the sword?”

He gets warned, but rejects his warnings.

It starts when Balak, king of Moab, sends messengers to P’tor to ask this famous soothsayer to come and “curse this nation that came out of Egypt” and now frightens Moab.  Balaam invites the messengers to stay overnight, while he communicates with G-d. In the morning he refuses to go with them because G-d told him not to.  “Do not curse this nation, for it is blessed.”  So he stays home.  Balak does not give up, however.  He sends higher-ranking nobles, and promises great honor to Balaam, a kind of write-your-own-ticket deal.  Again Balaam consults the Divine and reports this answer: “If they came to invite you, go. But only the words I put in your mouth may you say.”  The next morning, Balaam saddles his donkey, takes his two servants with him and begins his journey with Balak’s representatives.  No sooner are they on the road than the Torah tells us: “G-d was angry because Balaam went.”

What happened here?  Did G-d change His mind?   Not likely. The commentary called Or haKhayyim (“Light of Life”) explains the story. While Balaam refused the first invitation and told the messengers G-d would not permit him to go, he behaves differently now.   He just picks himself up and goes.  Not a word about Divine permission or about the limitations on it.  He acts as if he is above all that, just doing what he wants to do.

That is his first mistake.  The Torah describes him confidently riding down the road, oblivious of a Divine angel – presumably the malach hamovves, the angel of death – standing in front of him with a drawn sword. His donkey sees the angel and veers off the road into a field to save Balaam’s life, whereupon he slaps the donkey.

Mistake #2 proceeds from there.  Balaam decides that now that he is going to Balak, nothing – not even G-d — can keep him from damaging Israel.  Sensing this, the angel with the sword intercepts Balaam at a narrow spot between two fences.  Again the donkey swerves and bruises Balaam’s leg against one wall.  Again Balaam slaps the donkey.

Mistake #3 involves Balaam’s experience the night before, relying on his own witchcraft to determine if this trip will really benefit him. He decided that it will make him rich and powerful.  So he ignored the first two warnings.  He keeps riding.  This time the angel of death blocks the road at a turn so narrow that there is no way to get around him.   So the donkey sits down.  Furious, Balaam takes a stick and starts beating the donkey.

Now comes “Look out!”  G-d “opens the donkey’s mouth” to ask: “What did I do to you, to make you strike me three times?”

Balaam rages: “You ridiculed me!  If I had a sword in my hand I would kill you.”  More reasonable than he is, the donkey pleads: “Am I not the same donkey you rode all your life?  Did I ever do this before?”  Balaam has to admit: “No.”  Only then does he see the danger.  He bows before the angel, who tells him that if not for the donkey’s alert action, “I would kill you, and keep her alive.”  Her?  For no apparent reason, Balaam’s donkey is female.  Her warning is worth heeding.

Still Balaam does not change his mind.  The Torah text traces his course.   He reluctantly speaks the words of blessing that G-d puts in his mouth.   So Balak withdraws his offer.  Then Balaam, no longer trusting in his sorcery, sets out to destroy Israel another way.  He organizes a campaign of seduction.  “The men of Israel began to whore around with the daughters of Moab,” as we will read in Chapter 25, resulting in an epidemic of idolatry and disease.  The plague spread by Balaam’s sacred prostitutes kills 24,000.    When the Israelite army conquers Midian, no talking donkey will warn Balaam this time. His evil life ends on a sword.

One element under-riding this whole amazing story, but apparently ignored by the commentators, poses unasked questions. Why and how did Balaam, a heathen sorcerer, connect with G-d?  Did he have some knowledge of Israel’s faith, and wish to align himself with a military winner?  Did the Almighty accept him as a potential prophet?  Or does this story indicate that good intentions must be sincere, and if not they can result in disaster.  Preventing false prophets from bringing on that disaster requires some strong warnings – dramatized in our story by the talking donkey.  Who can qualify as a talking donkey, to give those strong warnings today?  You and I.

No lack of false prophets these days, speaking in the name of religion or democracy or whateverturnsyouonbaby.

Most of us might not have the opportunity to grab our friend’s bicycle and pull it away from that truck.  But we can yell “Look out!”  And hope our friends take warning from us — us, the talking donkeys.   We need to talk.  Those who do, can be heroic – or mistaken.  Or villains like Balaam.  They can also be worth listening to. 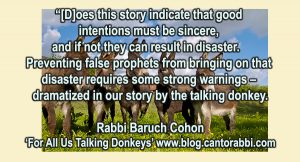