GETTING DOWN TO CASES – Mishpatim, Ex.21-24 By Rabbi Baruch Cohon

GETTING DOWN TO CASES – Mishpatim, Ex.21-24 By Rabbi Baruch Cohon

Last week the Torah gave us principles of conduct. General rights and wrongs. Now, reading Sedrah Mishpatim – “Judgments” — we get into some specifics. We know murder is wrong, but what actually constitutes murder? And what penalty should a human court impose? Questions like these get answered this week, some in remarkable ways.

These chapters detail laws about theft, seduction, injury, loans, idolatry, festivals, witchcraft, how to treat servants and when to rest the land. Most severe of the violations discussed here is murder, so let’s see how the Torah defines and punishes it.

In the days of the Torah revenge killing was acceptable. Like the Hatfields and McCoys of old Kentucky, the closest relative of a victim had the recognized right, even the duty, to kill the man who killed his brother. On the other hand, what if that original killing was not deliberate, if the man was swinging an axe to chop wood and the head of the axe flew off and killed the victim? Then the killer would have a place to take refuge. Elsewhere in the Torah we will read about cities of refuge where the avenging relative would not be allowed to enter. Interestingly, the practice of refuge for the inadvertent killer survived long after Torah times, and in unexpected places.

On our first visit to Hawaii my wife and I were taken on a sightseeing boat to a cave which was not accessible by land. There a diorama in the wall told how this cave was used. One who killed someone inadvertently could go there and remain safe until the death of the Big Kahuna. Exactly the same as the Cities of Refuge that Moses set up in ancient Israel. Even the word Kahuna (meaning priest) has a parallel sound and meaning to the Hebrew Kohen. A rabbi friend in Honolulu explained to me that when the Polynesians sailed across many miles of ocean to settle Hawaii they needed expert navigators, and at that time the best navigators in Asia were Jews. So apparently Hawaii got some Torah along with its pioneer population. A researcher at the University of Hawaii found a large number of Hawaiian words that have parallel meaning and sound to their Hebrew equivalents. Shaloha!

Now back to Exodus.

The ultimate refuge for a desperate fugitive was the holy altar. Even that, however, is not available to a real murderer. Here we learn that “if a man deliberately comes after his neighbor to kill him with guile” by deceit or by ambush, and then runs to the temple to save himself from justice, “from My altar you must take him to die.”

Among the most impressive of these many laws is the charge to judges: “Do not take a bribe, for a bribe will blind the clearest of eyes and subvert the words of the righteous.” We see frequent reports of bribery charges today, not confined to judges but challenging national officials too. Human beings are still subject to temptations that can “blind the eyes and subvert the words.”

Judges are further warned neither to oppress a poor litigant who is at their mercy nor to favor that poor litigant out of a sense of pity even though he is guilty. In a time and place known for corruption, the Torah denounces corruption. Rich in lessons for today, these chapters seem to anticipate democracy as we read: “Do not follow a majority to go astray.” Sometimes majorities can be wrong too.

Ideals are great. But they are merely slogans unless we can put them to work in our lives. That requires getting down to cases, as in Mishpatim. 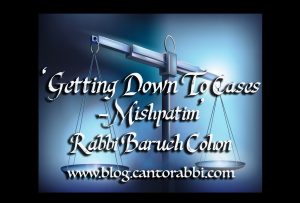