Bible commentators like the great Rashi taught that “there is no early and late in the Torah.” In other words, the order of events described in the Torah does not influence the importance of the laws derived from those events. Creation, Exodus, Mt. Sinai – all equally vital because all Divine origin.

And yet, we might consider the sequence of Mitzvos in the current 3 week cycle of readings. Just 2 weeks ago in the Sedrah called Yisro we reviewed the spectacular experience of receiving the Commandments at Sinai. That was followed by last week’s Mishpatim — ordinances detailing moral behavior and the punishments for violating them. And this week we begin to read the rules for constructing the first Jewish house of worship, the Tabernacle in the desert, the portable sanctuary that our ancestors carried with them for 40 years.

Who was qualified to build the first “house of G-d?” The people who witnessed the miracle of Sinai? The people who committed themselves to dealing justly with each other? Only they and no others? Here we will not find the airev rav – the Egyptian hangers-on who followed the Israelites across the Red Sea. Maybe some of them took Jethro’s example and accepted the Commandments, and maybe not, but we don’t find any role for them indicated in the sacred construction plans. Responsible leaders of the tribes of Israel are selected for this work.

In this week’s Haftorah we will also read about the construction of Solomon’s Temple, and the plans for cutting and importing the cedar trees from Lebanon for that job. Solomon and the king of Lebanon made a deal for those trees, and agreed that Israel would send the crews to cut them. Young men were assembled in 3 crews of 10,000 each, and spent a month at a time each on the job. Then another crew replaced them, so they could spend the next two months caring for their families. Moral obligations first, then work on the Temple.

Maybe we need to ask ourselves if that sequence of events – that “early and late” – applies to us now. Are we qualified to build a world, or a nation, or a community that can be a “house of G-d?” When we hear of religious figures convicted of moral and legal offenses, we have to ask if they really qualified to do sacred work.

Very likely, Rashi’s principle about “early and late” can be considered a literary observation, rather than a matter of principle. The Torah narrative sometimes includes a flashback. Historically, as many authorities recognize, we need to put those flashbacks in the order they occurred. But in the case of Mishpatim and T’rumah, we have a lesson to learn. Builders of G-d’s house have a moral standard that is required.

As we endeavor to build a future for ourselves, for our families, for our world, we should qualify for that sacred task, and our Torah guides us to that qualification. First, mishpatim – moral principles, how we deal with each other. Then t’rumah – sacred effort, how we strive to sanctify our lives and so improve our world. Each in our own way, let us qualify. 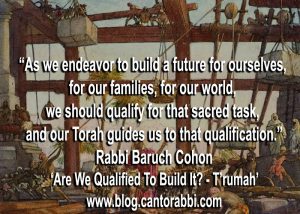