Of the five books of the Torah, the figure of Moses dominates four. His birth, his youth in the palace, his rediscovery of his people’s pain, and the hot temper that drove him to kill the brutal taskmaster – thus prompting his break with Pharaoh and his flight to the desert – all lead to his marriage to Zipporah, daughter of a man named Jethro, the heathen priest of Midian.

Yes, Moses married a heathen, a shiksa if you will. But remember, this “intermarriage” took place before Israel received the Torah.

Apparently drawn to Moses both for his physical strength – rolling the great rock off the well single handed – and for the power of his faith in the One G-d, Zipporah becomes a worthy and courageous wife. She is the one who circumcises her infant son when Moses misses the proper date. They have two sons, Gershom and Eliezer. Those Hebrew names remain popular among Jewish families ever since, but the original men do not figure in their people’s history. No books are named for them. They never lived in slavery, they did not experience the Exodus, and neither did their mother. Here we read of Eliezer’s birth, and a week later a crisis between his parents.

Was Moses angry with Zipporah for usurping his right of milah (bringing his son physically into the covenant)? Is that why Moses sent her and the boys to her father while he returned to Egypt? There’s that temper again.

Moses is called Moshe rabbeynu – Moses our teacher, our lawgiver, the man who brought us to Mount Sinai for the ultimate revelation. Rightly has it been observed that this revelation did not appear to one individual who then preached it to his people. It was revealed to the entire people – some two million of them. So far as we know, Judaism is the only one of all the world religions that proceeds from this kind of revelation. That is the scene that dramatizes this week’s Torah reading.

Of course every Torah reading – every Sedrah – has a Hebrew name. And what name does this week’s reading bear? Here we will read about the national preparations, the thunder and lightning on the mountain, the Voice of G-d communicating the Ten Commandments, which Moses then repeats. Is this reading named for Moses?

No, it is not. It bears the name Yisro – Yitro in Sephardic pronunciation – Jethro in English transliteration. Jethro, Moses’ father-in-law, the heathen priest of Midian! How does he rate?

Well, here we will learn that while he did not see the Exodus, Jethro heard about it, and took it to heart. He realized that not only was the Egyptian army submerged but the idols of Egypt were proven powerless. Only the One G-d inspired triumph. So here comes Jethro, bringing not only his newly acquired reverence for his son-in-law’s faith, but also the daughter and grandsons whom he has been sheltering, to reunite Moses’ family. As the story progresses, Jethro also offers Moses very practical advice. Watching Moses spend hours listening to tribesmen who come to him to settle quarrels, Jethro says: Don’t wear yourself out judging all these petty grievances. Appoint some able G-d-fearing truthful men, men who hate unjust gain, and make them rulers of thousands, hundreds, fifties and tens. Let them bring you the hardest cases, and let them judge the rest. Moses gratefully takes the advice, and then sends Jethro home. Why doesn’t he keep him in the camp? Rashi says Jethro was to go and bring the One G-d to the rest of his family.

So when Israel receives the Torah at Mount Sinai, Jethro is not there. Yet he gives his name to this momentous Sedrah, as a helper and motivator. And indeed that is how we remember him these thousands of years later – as a devoted family man, as a man with high intelligence and an open mind, as a man who did not hear the Ten Commandments spoken from On High, but could detail the difference between right and wrong. That’s what they are about, isn’t it? Right and wrong. Given their sacred origin, they are not about mystic truth. They set standards for life — not in heaven but right here on earth.

Today, the so-called Big Ten may be considered Politically Incorrect by those who would censor the Divine out of any public displays. But these messages of right and wrong still ring true. Like Jethro, let all who are wise enough to recognize the value of these great Commandments be remembered and respected. 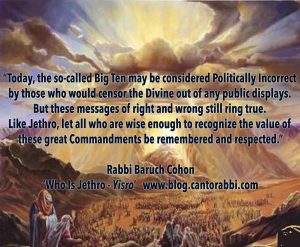