Appropriately named Shoftim – Judges, this reading deals with principles and practices Moses teaches, about what is justice and how to enforce it.

One theme that gets repeated here says: “Expunge the evil from your midst – uviarta haRa  mi-kirbekha.” That is not just the theme of Moses’ teaching, it is the motivation behind all of it.  If someone is convicted of a capital offense – whether murder, rape, leading others into idolatry, or presenting false evidence to get someone else punished – and the offender is found guilty, then that offender, whether male or female, must be executed.

Why? Doesn’t every human being contain the Divine image?  How does a violent death cancel out an offense, even if that offense was equally violent?

True, killing the criminal make it impossible for the same criminal to repeat the crime.  But that’s not enough.  Not for Moses, and not for Judaism.

If Hatfield kills McCoy, and McCoy Jr. kills Hatfield in return, that’s not justice. That’s revenge.  In recent chapters, Torah law went into considerable detail to limit the power of revenge.  In Moses’ time, the next-of-kin had the right and the duty to hunt down his kinsman’s killer and take his life. That was the accepted practice: revenge killing.  But Torah law limited that right to very specific circumstances.  Above all, it limits the valid motivation for the return killing. Not revenge, now.  But “expunging the evil.”

Take the case of a criminal who does not commit murder, he just plotted to get his neighbor in trouble.

“As he plotted to have done to his brother, so let it be done to him,” says Moses.

“And all the people shall see, and they will not presume [to violate] again.”

Never mind the fact that we all have sacred souls.  By our own violations, and by credible eye-witness testimony of our fellows, we can desecrate those souls, and bring on the violent punishments described in this reading.  Not because society is taking revenge on us, but in order to expunge the evil. 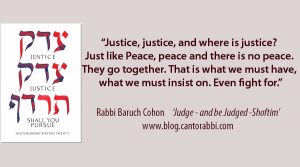