In this section, during Moses’ second discourse to the people on the bank of the Jordan, he reviews the laws of religious observance.  One sentence stands out as particularly significant.  “Do not do as we do here today, each man whatever is right in his own eyes.”   [Deut. 12:8]  Once they enter the Holy Land, religious observance would become a national activity with uniform rules and regulations.  It would take considerable time to establish those rules and achieve any national conformity.  Only by the time of King Solomon and the building of the First Temple did a national ritual actually prevail.  But Moses set the goal.

What happened after the Temple was destroyed, of course, Moses could not envision.  Exiled to Babylonia or conquered by Rome, the Talmudic sages saw that without the Temple, without that national center of religious practice, it was as if the Divine spirit had no home in Jewish life except for the “four cubits of Halacha (Jewish law).”  Portable Judaism found its expression in legal learning and the consequently legislated prayers and other practices that took the place of the sacrificial cult set forth in the Torah.  But still, the laissez-faire religious life of the desert was not acceptable.

Moving into modern times, we can certainly observe a revival of “each man doing whatever is right in his own eyes.”  Some Jews group together in organizations and movements to form some kind of sub-national religious life.  Others reject organized religion altogether.   Disunity and conflict result.  In the spirit of freedom and democracy, one Jew will ask another: How can you tell me what to believe or what to observe?  After all, isn’t religion an individual matter?

Not for Moses.  And in fact not for many non-observant Jews of our time either.  Time and again, I’ve had the experience of dealing with families who face the loss of a loved one and look for the comfort of our tradition.  “We want to do what Mom would want,” they say.  Or, “What is the right way to honor our father?”  Maybe their parent was observant and maybe not.  But at times of grief they find solace in time-honored practices.  A Jewish funeral.  A sincere memorial service.

Danger and emergency can always send humans to G-d for help.  The old saying, “there are no atheists in foxholes,” was dramatized for me during WW2 when the Navy minesweeper I served on went through a typhoon.  The whole ship was 136 feet long, and we were tossed by 60-foot swells.  Our little ship would shudder at the top of one of those waves, both screws out of the water, vibrating as if every nail would pop out of her wooden hull.  Then she would crash down into the trough between the swells, with water breaking over the flying bridge – and every crewman praying to his own god in whatever words he knew.

Is religion an individual matter?  Yes it was, on that ship that night.  What about at times of joy, of celebration?   Bringing a new life into the world and into the family calls for more than a handshake of congratulations.  A feeling deep inside calls for a type of expression of gratitude, something sacred, something moving – a ceremony.  And so we have baby-namings, at home or in the synagogue, and we invite our relatives and friends.

Is each of us just doing “whatever is right in our own eyes?”  In a way, yes.  And in another very important way, no.  Because we are drawing on the experience and heritage of our people over many centuries.

That heritage includes Biblical commands of violence to punish violators.  False prophets, family members who leave the faith and try to take you with them, or even an entire city that decides to practice idolatry.  The Torah condemns them all to death.

Commentators dealt carefully with these commands to violence, as when Moses says “Your hand shall be first against him (the apostate) and finally the hand of all the people.”  Rashi and others insist that the violator first had to stand trial, and only if found guilty would be killed.  Rabbi J. H. Hertz (former Chief Rabbi of England) points out that “Jewish history does not record a single instance of punishment for religious seduction by a false prophet or a member of one’s family .”

Another case of Biblical justice applied – or not applied – concerns the pursuer.  If you see an armed man chasing another man who is unarmed, and you assume the pursuer has murder in mind, it is your duty to stop him.  But if the unarmed man runs inside a building and the pursuer follows him, and then the pursuer comes out the other side without his weapon, and you go in and find the fugitive dead and the weapon by his side?  You have no case.  It takes two eye witnesses to convict a murderer.  You don’t know if the dead man wrestled the sword away from his attacker and then fell on it.  You don’t know, so you cannot testify.  And without an eye witness, there is no execution.

This type of case occurred in modern Israel with the death of General Motta Gur, who was assumed to be a suicide.  He died of a gunshot in his own back yard and was found with a pistol in his hand.  Yet he received a funeral with all military honors.  Some people asked how that could happen, when suicide is after all a terrible sin in Judaism.  One answer detailed the law of two eye witnesses.  Maybe someone jumped the fence, killed Gur and placed the gun in his hand before escaping?  Another answer, less legalistic, concerned his national value as an important leader in the Six Day War.  No witnesses, so give him the benefit of the doubt.

In this Second Discourse, Moses appears to leave no stone unturned.  He describes right and wrong in one situation after another.  The community gains people and loses people, and he teaches methods to deal with those changes.  In our own time, we hear over and again about the 6 million lives lost in the Holocaust through mass murder, and we also hear that more people were lost to a Jewish future since then, by assimilation and conversion.  Indeed, in some parts of the world, only DNA can prove any connection to the Jewish people.  Maybe those that Moses called the “idolaters” are the real sufferers.  They don’t even know what they are missing – all the wonderful color and flavor of Jewish life.  They deprived themselves of what Moses told us is “the blessing…if you follow the mitzvos – the way of life – that I command you today.”

It’s the positive choice each of us can take, and survive by taking.  Ever since Moses. 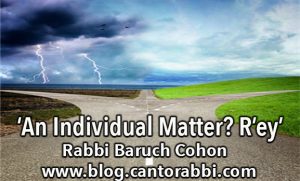