This section opens with a paragraph about proper conduct in war, but the following chapters are not about war.  They continue building the Torah’s structure of acceptable human conduct in all the conditions of life.  And yet, perhaps the most significant lesson comes in the section’s opening words:  Like parallel passages in previous chapters, this sentence challenges translators:

Then they both continue with a detailed message about now to treat a female captive.

The question raised concerns the translation of the word Kee.  Does it mean “When?”  Or “If?” “When” would accept the reality that wars happen, and there are rules – or there should be rules – governing the soldier’s conduct in war, as in peace.  On the other hand, “If” would indicate a choice.  You go out to war only if you want to?  Volunteers get sworn in, while civilians are exempt?

Not a chance.  We are all charged with the basic goal of uviarta ha-ra –“Purge the evil.”

On further examination, an ordinary Hebrew-English dictionary will offer several translations of the word Kee, including both “if” and “when.”  Of course both English words have other Hebrew equivalents, like “Im” for “If” and “Ka-asher” for “When.”  But let’s stick with “Kee” since it can apply to both interpretations. Interestingly enough, the same dictionary will also translate Kee as “because.”  Thereby we can learn something: you go to war because– because you have enemies and they attack you, because you have to fight them off before they destroy you, or maybe because you want to make peace and they won’t negotiate with you.

With one little word, our reading illustrates a historical truth that frequently gets ignored: it takes two to make peace, but only one to make war.  If you go out to war, and when you go out to war, it’s because you have no choice.  Remember, the Torah is not talking about some adventurous emperor that goes out to conquer territory.  It is talking about action against a violent threat.  No choice.  Some political theorists may imagine such a choice, but go find it.  Cases in point: Gaza rockets, 9/11 attacks, Pearl Harbor.

Among the captives, in Torah times and even more so today, there are women.  The compassionate treatment of those women as outlined in the Torah for victorious Israelite soldiers differed entirely, of course, from the treatment Israelite women could expect under the reverse conditions.

Several connected passages sharpen this point. Enemies though they may be, defeated and defenseless though they become, they are human.  In a later passage we read: “Do not despise an Edomite; he is your brother.”  And even this one: “Do not despise an Egyptian, because you were a stranger in his country.”  Yes, his ancestors enslaved your ancestors, but he wasn’t there.  And neither were you.

On the contrary, at the very end of this reading we find a command that will be repeated on Purim: “Destroy the memory of Amalek!”  Not just the fighting forces of Amalek but his evil plan.  The very memory of Amalek must be destroyed.  Not an easy task.  Significantly, next Purim we will again hear this interpretation: Haman mi-zera Amalek – Haman, the Purim villain described in the Book of Esther, was descended from Amalek!  Evidently Israel went to war against Amalek but did not finish the job.  Did not purge the evil.  Besides Haman, the descendants of Amalek – whether physical or spiritual – include Torquemada, Khmelnitsky, Hitler, Arafat, Khamenei – and the list goes on, demanding our attention, calling for action.  Not if, not when.  Because.  Because we must purge the evil.

In order to purge the evil, we must be sure to identify our enemies. 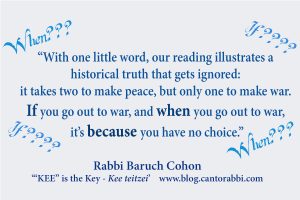