The final Torah reading in the Book of Genesis recounts the end of life for both Jacob and Joseph. Much is written about the name of this reading. Like Hayey Sarah – literally “the life of Sarah” — earlier in Genesis, it tells the death of patriarchal figures, but it is not called an obituary, but an acknowledgement of life. So this portion too is called Va-y’khee Yaakov – “Jacob lived.” In fact, Jacob lived a full and eventful life, as did Sarah in that other portion, and that is what we remember and honor, as we should, both for them and for our own loved ones. We ourselves would hope to be remembered that way too.

One striking difference in this week’s narratives is how much detail is devoted to Jacob’s passing, as compared with Joseph’s. A total of 72 verses tell of Jacob’s illness, his detailed parting messages to his children and grandchildren, his death, the mourning period which follows, and the trip to Canaan to bury him in the family gravesite, the Cave of Machpelah. Then come the last 12 verses of this book, covering Joseph’s return to Egypt, his final relationship with his brothers, the birth of his great-grandchildren, his farewell and embalming. 72 to 12! Quite a contrast.

Was Joseph so much less important than his father? We know that the rest of Jewish history was impossible without him. He forgave his brothers for their cruelty to him in his youth. He rescued the whole family from starvation. Why such a brief ending to such a heroic biography?

If we truly did read the preceding chapters, exploring the conditions leading to this conclusion, we know what happened. The Torah devotes many chapters to Joseph’s adventures. His messages to those around him were delivered in a variety of ways. Maybe we don’t need any more details of the end of his life. Some of our commentators zero in on the difference in the burial process for Joseph and Jacob. At his own last request, Jacob is not buried in Egypt but his body is transported with great ceremony to Canaan to be buried with his parents and his wife Leah. On the other hand Joseph is embalmed and his body placed in a coffin in Egypt where it will remain during his people’s slavery, to be taken with them when Moses will lead them to freedom. How long was that? Depending on which historians we follow, it might have been 300 years, or considerably less. Online historian Matthew McGee dates the death of Joseph in the Hebrew year 2310, corresponding to 1640 BCE, and the Exodus in 2454, corresponding to 1496 BCE. A period of 144 years. Still a long time for a body to remain unburied. Yet next month we will read how Moses will take Joseph’s bones with him, across the Red Sea and through the desert to be placed in a special tomb in the Promised Land – a tomb that our current enemies have virtually destroyed. Evil still attacks Joseph. Regarding disposal of his body, however, our commentators point out that while Jacob “went home” at the end of his life, Joseph wanted to stay with his people.

Both decisions have merit, both for the living and the dead. After lives of adventure and event, of victories and defeats, having greater effect than most of us, these patriarchs made their logical individual choices. Jacob elected to spend eternity as close as possible to his departed dear ones. Joseph would remain with the living Israelites as best he could.

We fulfill a precious Mitzvah when we visit the grave of a parent no matter where it is. And we treasure the memory of that parent wherever we are. Even if we don’t know the actual location of the loved one’s body, we can express our feelings for the n’shama, the spirit, the presence that memory preserves. Yizkor services and yortzite observances reinforce those feelings. Like Joseph, our loved ones stay with us. 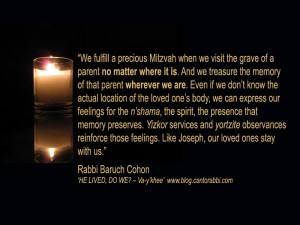