Before going into the climactic chapter of the Joseph story, let me correct a mistake in last week’s blog. Its first paragraph mentioned “two Torah readings” last Shabat. It should say “three Torah readings.” One for the Sabbath, one for Hanukkah and one for Rosh Hodesh. I must say I was surprised to receive no emails about this. In fact, last Shabat was one of the very few occasions when we use three Torah scrolls in the same service, since we do not take the congregation’s time to wait while we roll one Sefer Torah from one reading to another. Please note!

This week, we will be reading the next chapters of the story, including where Joseph takes his needy family to the Land of Goshen, a safe section of Egypt. The Hebrew form of “to Goshen” is Goshnah, and a Lubavitcher Rebbe remarks that the four letters of Goshnah are the same four that appear on the four sides of the dreidel – so it’s very appropriate to read this story around Hanukkah time!

Now for Vayigash – literally, “he approached.” Judah is doing the approaching, and Joseph is the man he faces. As viceroy of Egypt, Joseph just “framed” Benjamin for stealing his goblet, so he decreed that Benjamin must remain as his slave while the rest of the brothers go back to Canaan. While not stated, we can assume this is Joseph’s trick to reunite with his kid brother.

But now Judah approaches him to plead for Benjamin’s release, even offering himself to take Benjamin’s place. In harsh dramatic tones he describes his father’s attachment to the youngest son – only survivor of his mother – and his bereavement, since he believed Joseph dead. And he predicts that if they don’t bring Benjamin home with them, Jacob will die of grief. “Therefore,” he urges, “let [me], your servant, stay as a slave instead of the boy. And let the boy go home with his brothers.”

What courage it took for Judah to approach this man who wields absolute authority. He even affirms “kamocha k’Pharaoh – you are like Pharaoh.” The Midrash tells us that at first Judah spoke softly and humbly, remembering his own crime against his brother Joseph when they sold him into slavery. But seeing punishment threatening to fall on the innocent Benjamin, he dropped all caution and spoke so loud that his voice resounded throughout Egypt!

All through the last visits of the brothers to Egypt, Joseph maintained his Egyptian front, speaking with them through interpreters, and wreaking his petty revenge for their crime against him some 22 years ago. But after Judah’s impassioned speech to him, we will read a total different reaction from Joseph. He sends out all the up-to men – – the interpreters, the nobles, the big shots – and in tears he addresses his brothers directly. In Hebrew! He tells them simply “I am Joseph. Is my father still alive?”

What their need could not do, what his authority prevented, what his vengeful urges caused – all those factors failed to reveal Joseph to his brothers. Only Judah’s courage and concern made the difference.

Like Joseph, we often tend to make the most of things as they are. But like Judah, we can sometimes struggle to make things what they should be. We might even succeed. 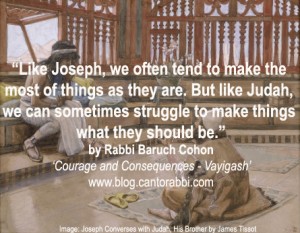