This week gives us not one Torah reading and one from the prophets but two from Torah and three from prophets, because this week features three celebrations on the same day.

First, of course, is Shabat. The reading for this Shabat tells the story of Joseph and his brothers, as he plays cat-and-mouse with them in Egypt. He knows them but they don’t recognize him. All they know is that he is the Viceroy of Egypt and holds life-and-death power over them. He conducts himself with some of the willful eccentricities that such power makes possible, demanding that they bring their youngest brother to meet him. He holds Shimon hostage until they return with that boy, Benjamin, Joseph’s only full brother, the one he really wants to see. He then frames Benjamin for stealing, by having his servants plant his divination cup in Benjamin’s pack, and demands the brothers leave Benjamin to be his slave while they return to fetch their father. Moved by Judah’s pleas for Benjamin’s life, Joseph has to retreat to his private room to weep. But he manages to retain his official front throughout this week’s reading. So here we have some classic family drama. To be continued next week.

Second, this will be a Shabat during Hanukkah. And of course, the very word “Hanukkah” means “Dedication.” The Maccabees defeated the Greeks in order to free the Temple and rededicate it. And their ceremony followed the example Moses set when he dedicated the Tabernacle in the desert. This year, Shabat falls on the 6th day of Hanukkah. So this week the last Torah reading comes from a second scroll and describes the offering brought on the 6th day of the Tabernacle dedication, by a prince of the tribe of Gad. Worth noting, Moses held the dedication for 12 days, giving each tribe a day to celebrate. The Maccabees had only 8 days. But hey, Moses didn’t have a one-day supply of oil that burned for 8 days! A special feature of Shabat Hanukkah is its Haftorah – its prophetic reading. This one is from Zachariah who urges the Daughter of Zion to “sing and rejoice — Ra-nee v’sim-khee bat Tziyon”—because G-d will dwell with her and her people. Unlike other Haftoros, this one is chanted twice a year: once now and once with the Torah reading describing Aaron lighting the sacred flame, a section we will read next June. Also a tale of dedication. And Hanukkah still comes just once a year.

Third, this Shabat is Rosh Hodesh, beginning the new month of Teveth. So we are combining a weekly celebration with an annual one and a monthly one. To acknowledge this part of our triple day, we will add a short prophetic section from Isaiah envisioning a time when all humanity will observe New Months and Sabbaths by worshipping G-d, and a few sentences from the First book of Samuel where Jonathan reminds us that tomorrow is also Rosh Hodesh. Yes, Teveth is one of those months that has 2 semi-holidays to start it off.

Quite a challenging combination we have on this Triple Celebration. We learn a lot about sibling rivalry from Joseph and his brothers, we join in the spirit of dedication, and we welcome a new month in hope and faith that it will be a better one.

This week we should really greet each other Goot Shabos, Goot Yontov, Goot Yor! 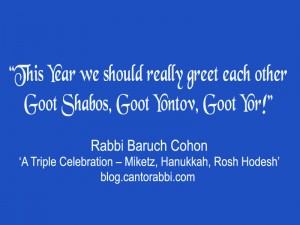