One underlying theme in this first section of the Book of Exodus is the Divine hand in the lives of the Israelite people. Prolific and resourceful, they alarm an insecure monarch, who proceeds to try squelching them. Over the few centuries since Jacob brought his family to Egypt, they increased from a total of 70 people to hundreds of thousands. Judging from the figures recorded in Exodus, their birthrate was astounding. No wonder the Pharoah who “did not know Joseph” got scared. He corrals their men to construct cities for him. Not just warehouses, these are entire towns built to store his nation’s products. To make sure the Israelite laborers get tired, he sets supervisors over them to overwork them, strawbosses who “afflicted them with their burdens.” They were not to build any ordinary city, but fortified structures, reinforced to hold Egypt’s wealth. After long days of heavy steady labor, these men could be expected to lose some of their strength. Result would be fewer Israelite babies. Right, Pharaoh?

Wrong again. The more they afflicted the Israelites, “embittering their lives with hard work in mortar and bricks and field labor,” the more prolific they became and the more they “spread abroad.” Seeing that he was not exhausting the men, Pharaoh decides to engage in violent birth control. He tries working through the midwives who deliver Israelite babies. “When you see the baby on the birth-stool, if it is a boy, kill him. But if it is a girl, let her live.” The midwives, however, answer to a Higher Power. They provide Pharaoh with even less success than the strawbosses did. When he calls them to account, they protest that the Israelite women are not like the Egyptians. “They are lively! They deliver, even before the midwife arrives.”

The Torah identifies just two midwives, Shifrah and Puah. Noting that two midwives could hardly attend such a population, our commentators, starting with Rashi, identify them with Yocheved and Miriam, Moses’ mother and sister, as if they were symbolic of all the Israelite midwives. Clearly, the Israelite birthrate is Pharoah’s chief worry. Of course, if those “lively women” were bearing children to Egyptian fathers, the birthrate would not be a problem to him. So he issues orders that bypass the midwives. He dictates mass infant murder. “He commands his people, saying, Every son that is born (to an Israelite) you shall throw him in the Nile, and every daughter you shall keep alive.” Did I hear you say Genocide?

No. Pharaoh had no gas chambers. He failed to halt the Israelite birthrate, or even reduce it. In fact, looking ahead to the generation of the Exodus, we find Moses leading some 600,000 men of military age, plus women, children and old people, plus a mixed multitude of non-Israelite followers – easily estimated at more than 2 million total who assembled at Mount Sinai to receive the Torah.

Let’s pause a minute and express our thanks for the courage of the midwives who kept those little boys alive, and for the inefficiency of the dreaded strawbosses who couldn’t wear the fathers out. Moses was truly our greatest leader and Aaron functioned as both a mouthpiece and a miracle worker, but they didn’t rescue our people alone. They had some unsung support – from the midwives and the strawbosses. 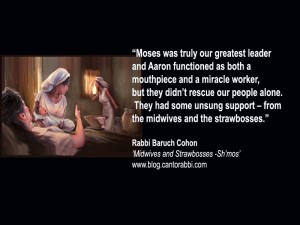