Do you start naming the months of the year with July? Maybe you should. After all, July is the month of American freedom. We don’t change years in July, but the Founding Fathers changed a nation in that month.

Jewish custom, as every Hebrew school student knows, is to recite the months of the year as follows: Nisan, Iyar, Sivan, Tamuz, Av, Elul, Tishri, Kheshvan, Kislev, Teveth, Shvat, Adar. Since we start in Tishri, the month of Rosh Hashana when we change years, Nisan would be the seventh month. Just like July on the English calendar. And why not? Considered this way, each of them can qualify as the Month of Freedom.

Indeed, this week as we welcome the month of Nisan, we will read a special Maftir – a supplementary Torah section from a second scroll, in the book of Exodus – describing the preparations for the original Exodus when our ancestors left Egypt and became a free nation. “This month for you is the head of the months,” says the Torah. “First of the months of the year is it for you.”

How were we commanded to observe it? No dances, no New Years Eve parties, just take a lamb for a special dinner. One lamb per household. And not on Rosh Hodesh, but on the 10th of the month, giving us another four days to prepare. On the night of the 14th, slaughter the lamb at twilight, smear some of its blood on the doorpost, and roast the lamb on an open fire to eat with Matzos and bitter herbs. Hardly an exciting event.

Further details limit the celebration still more. The lamb must be consumed that night, so the family must gauge each member’s appetite, and anticipate how much of that lamb they need. Because if they can’t reasonably expect to finish it, they must split it with another household. Any leftovers are to be burned in the morning.

No fancy clothes, either. “Your waist should be belted, your shoes on your feet and your staff in your hand.” Ready to travel, to a distant unknown land.

That was the original Seder. Not much like today’s family party. We don’t even eat lamb, in fact we stopped doing that when the Temple was destroyed and the Paschal sacrifice had to be discontinued. Not yet an occasion to express the pride and joy of a fulfilled heritage, the original Seder was a night to get ready for the fateful fight for freedom. Think about it. Was the spirit so different on the original Fourth of July?

Soldiers of the Revolutionary War certainly had to tighten their belts, keep their shoes on, and shoulder their guns. Declaring independence was only the beginning, and they knew it.

Since the days of Moses, we saw some 30 centuries combine to build desperate Hebrew slaves into a learned and accomplished nation. Just so, since the days of George Washington, a mere 24 decades built brave – and fearful – Revolutionary warriors into a proud world power. Just as we need to champion our people in Israel to build their power nationally, and scientifically and religiously and economically – so we here in the United States must remember to rebuild American power, and to rally around the ideals and the freedoms of the country we call home.

We have some inspiring parallels in Jewish and American history, and we should consider Freedom Month among them. We don’t need to make it numerically the first month of the year, but #7 rates a special place in our lives. 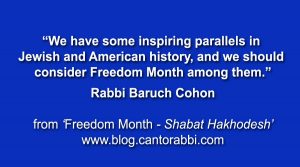