HOW MUCH TO SACRIFICE – Vayikra – Leviticus 1-5, by Rabbi Baruch Cohon

HOW MUCH TO SACRIFICE – Vayikra – Leviticus 1-5, by Rabbi Baruch Cohon

The Book of Leviticus – called in Hebrew “Vayikra” – begins with the call to Moses, written with a small letter “aleph” at the end of the first word. Various commentators ancient and modern go through some literary contortions to explain that little “aleph,” but let’s not get into that right now.

Bigger fish to fry. Or rather, bigger animals, birds, fine flour – bigger sacrifices. Kind of hard to relate to the procedure of animal sacrifice as the expression of religion, these days, but let’s try. Starting here, Leviticus spells out all the rules for bringing and offering different animal sacrifices, as was done in the Tabernacle in the desert, and later in the Temple in Jerusalem. Sacrifices celebrated holidays. They also expressed guilt.

Most of this middle book of the Torah describes and proscribes the sacrificial cult. Why should we continue reading these details every year? For nearly 2,000 years, since the destruction of the Temple, we have not offered animal sacrifices. The rabbis decreed “t’filah bimkom korban – prayer replaces sacrifice.” But we still review the process in our Torah reading. Let’s see what we can learn from it.

If the anointed kohen – the officiating son or descendant of Aaron – committed a violation (and the text names a few, from becoming ritually contaminated to misappropriating a dedicated object) he had to bring a young bull. If a tribal chief – a nasi, a “prince” – was the violator, he had to bring a sheep. An ordinary Israelite brought a goat. And that only if he could afford it. The Torah specifically provides a way to pay for a mistake without taking food from the family’s mouths. “If he cannot afford (literally if his hand does not reach the value of) a sheep, he brings two doves or two pigeons, one for a sin offering and one for a burnt offering.” Further, if birds are out of his “reach,” let him bring an offering of fine flour.

Clearly, the value of the sacrifice is not the vital factor. It is the action. Once you acknowledge your mistake, you express your regret through a sacrifice. That’s how they did it in the time of Moses and for many following generations. This kind of payment for violating a negative commandment applied to business dealings as well as to relations with the Divine. If an Israelite cheated his neighbor by denying an obligation – “a deposit? What deposit?” – or by not returning a pledge (security for a loan) or by finding something his neighbor lost and not returning it, or by theft, or by not paying wages and then lying about it – he must return what he had no right to keep, and must add a fifth of its value as a penalty. Then he must still bring his guilt sacrifice. Only then can the kohen help him to atone for his violation. Only then will he be forgiven.

In later days, as prayer replaced sacrifice, each Jew had to take on more responsibility. We can’t pay for our mistakes with pigeons any more. But we can still return a lost article. We can still acknowledge our debts and pay them. And we can still atone – not just once a year on Yom Kippur but every day in our prayers. And in our attitude.

That is our sacrifice. Admit we did wrong, and do what we can to correct it. How about it? Would it be easier to slaughter a goat? 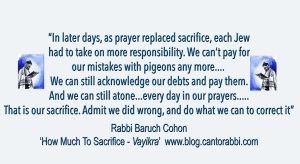