This week’s Torah section, Vayishlakh, includes a famous struggle. Genesis 32 recounts how Jacob, expecting to encounter his vengeful brother Esau, sets up a camp for his 4 wives and 11 children on the safe side of the river Jabbok while he himself camps on the other side. That night, “a man (ish) wrestled with him until the dawn rose.” Seeing that he could not beat Jacob, the stranger asks to be released before daylight. Jacob refuses to release him until the stranger blesses him. Then follows this conversation:

“What is your name?”

“No longer will your name be called Jacob, but Israel. For you have striven with G-d and with men and you have prevailed.”

Etymologically, the name Israel and the word for striven, sarita, come from the same root. The mysterious adversary, while he is called ish – a man – is understood to be an angel. He is even identified as the angel of Esau. He cannot stay and fight in daylight, and he will not give his name. He brushes the question aside, saying:

“Why do you ask for my name?” And he blesses Jacob there.

But during the fight he injures Jacob in the hollow of the thigh. As a memorial of that fight, the Torah states, “the descendants of Israel do not eat the sinew of the thigh vein.” So, long before receiving the Torah at Sinai, with its dietary laws, the custom started to abstain from eating the hind quarters of animals. The same hind quarters that kosher butchers still sell off to non-Jewish meat markets.

After the fight, the superhuman wrestler is gone. Israel, the winner, is limping.

This Sedrah also recounts Esau’s family history. One of his wives is Ishmael’s daughter. Another source of conflict. So the wrestling goes on. Jacob fought Esau in the womb. Israel fights Esau’s champion in the dark. Their descendants struggle against each other in the United Nations.

Ever since Jacob fought his way to becoming Israel, the wrestling match continues. Sometimes in one place, sometimes in another, we struggle with enemies who seem too strong to be human. Defeating them makes us Israel. We might limp for a while, but we survive.

If Israel/Jacob/Jeshurun could prevail against a superhuman adversary, the Jewish people and the Jewish state today can face whatever human enemies may threaten. Never mind the limp. Go for victory. 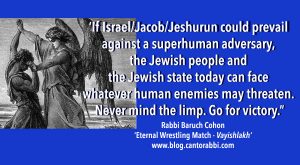