Among the world’s most famous stories, Joseph’s ranks high. Modern writers from Thomas Mann to Andrew Lloyd Weber based well known adaptations on this week’s Torah portion. A rather confused version of it found its way into the Koran. Surely as an allegory of sibling conflict, it cannot be equaled. From its point in history, some 39 centuries ago, through 4 centuries in Egypt, through 15 more mostly in the Land of Israel, another 18 in total exile, to our own current 68 years of life in and out of the restored Jewish state, Jacob’s descendants find themselves re-living parts of the story of Joseph.

One climactic event in the story takes place early on, when Joseph gets sold to a “caravan of Ishmaelites.” These descendants of Joseph’s great-uncle Ishmael, his grandfather Isaac’s lifelong enemy, were the ancestors of today’s Arabs. They proceeded to put their new slave to work tending the camels while they trekked their way to Egypt, where they re-sold him. That much is clear.

What stimulated some disagreement among our commentators is the Torah’s wording of this sale. First, we find Joseph joining his brothers who are tending the flocks, and they are anything but glad to welcome him. They strip off Joseph’s coat of many colors – symbol of his father’s favoritism that turned his brothers against him. Then they debate whether to kill him, and how. Reuben convinces them not to shed his blood themselves, but to drop him into a pit while they have lunch and debate what to do with him. Reuben apparently is not eating with them, but goes away – we don’t know where – and hopes to rescue Joseph and return him to their father. But Judah, the born leader among them, uses that lunch to convince them not to kill their brother – since his death would bring them no profit – but to sell him to those Ishmaelite traders whom they can see approaching from a distance. Meanwhile, another group shows up, from somewhere closer. These are described as Midyanim sokharim – Midianite merchants. The sentence continues: “They pulled Joseph and lifted him out of the pit, and they sold Joseph to the Ishmaelites for 20 silver coins.”

They? Who were they?

Who pulled? Who lifted? Who sold? Was it Joseph’s brothers or the Midianite traders? Rashi says that “they” refers to Joseph’s brothers. But Rashbam’s commentary states that it was the Midianites who passed the pit, heard human cries there, pulled Joseph to safety and sold him. All this during the brothers’ lunchtime debate.

Does Rashbam’s interpretation cancel the brothers’ guilt? Certainly they planned to sell Joseph. Did they or didn’t they? Could that lunchtime debate change their plans for betraying their brother?

Indeed this is a question that could be asked innumerable times over the past 3900 years. Who betrayed Jerusalem to the Roman legions – a Bar Kamtza who reportedly precipitated the attack out of revenge because he was rejected from a high class dinner? Or perhaps some false friend from the surrounding heathen tribes?

Daily news now underscores both answers. Selling out Jews and Israel by political leaders who benefitted from Jewish support? We see it happening over and again. Subsidize our enemies as they work up a nuclear bomb, for just one example.

And brother selling out brother can aggravate mass murder, as it did in World War 2 Budapest, where a young Jew reportedly identified other Jews to the Nazis for seizure, confiscation and dispatch to death camps – in exchange for cash fees which eventually he expanded to billions, and now finances efforts to destroy Israel.

George Soros, as he now calls himself, is hardly the only “brother” whose treason endangers us. People with much smaller fortunes, but with some political skill, mount various movements which can defeat Jewish goals and destroy the Jewish future.

What we need to remember is what Joseph achieved in spite of the damage his brothers did. He had nothing to work with but his faith in his heritage and in his own ability, but he rose to rule Egypt, and succeeded in rescuing his family – the very brothers who once hated him.

Like Joseph of old, we have many colors on our coat. We are all anything but identical. Yet we have common interests and a great shared heritage. We can fulfill that heritage if we work together. 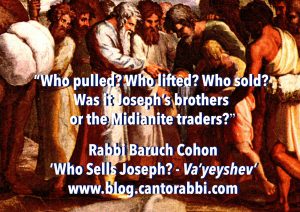