ADVERTISING AS A SACRED DUTY – by Rabbi Baruch Cohon

ADVERTISING AS A SACRED DUTY – by Rabbi Baruch Cohon

The Aramaic name for it is “Parsumey nissa.” The time for it is early evening, when people are on their way home from work. And the action involved is striking a match, lighting some candles in a candelabrum and placing it in our front window. Facing the street. Why? Because it’s Hanukkah. Because a miracle happened in Israel in the Jewish year 3586, and we celebrate its anniversary. How? By advertising the miracle – “parsumey nissa,” – setting those bright candles out there where people will see them. It’s Hanukkah, everyone! We should all know something about advertising, shouldn’t we?

Before we do all this, of course, we chant a blessing, giving thanks for the miracle that happened for our ancestors, in those days, at this time. This action – exhibiting our lit menorah for all passersby to see – is how we advertise the miracle of the Maccabees, when as our prayers tell us “G-d, in Your great mercy You fought their battle…and the strong lost to the weak, the many to the few, the impure to the pure, the wicked to the righteous, and the arrogant lost to those who devoted themselves to Your Torah.” So this act of advertising is truly a sacred duty. Let’s remember the purpose of the menorah this year: Parsumey nissa.

What we should also remember, of course, is the fact that we do not glorify the personalities of the Maccabees, but we celebrate the victory they achieved by their inspiration, their determination to resist oppression. They defeated attacks on their faith – our faith. And like their modern successors, they had no allies. Their story took place only 2,191 years ago, and things like government and politics were rather different then. Or were they?

Believe it or not, they had such a thing as corruption then too. After driving the Greek invaders from the Temple, Judah Maccabee and his brothers proceeded to take over ruling the country. As glorious as they were in battle, they were inglorious as rulers. So we still celebrate their victory, but not their personalities. It’s “Parsumey nissa” — Publicize the Miracle. Not “Publicize the Maccabees.”

In our day as we approach the 22nd century since the Hanukkah miracle, we can couple our sacred advertising with a prayer for a new miracle. The very name of our holiday, remember, is Hanukkah – literally Dedication. With Divine inspiration, our ancestors were able to reclaim the Temple and dedicate it, with that little bottle of oil – the only one that the Maccabees found still sealed with the High Priest’s seal – just enough to burn for one day. And we recall the miracle that it burned for 8 days. That, says the Talmud, is the true miracle of Hanukkah.

We can also recall the experience of 1967 – not 21 centuries ago, just 49 years ago – when an Israeli general liberated the Old City and radioed headquarters with the historic message “Har haBayit b’yadeynu” – the Temple Mount is in our hands! And they would not let him take it. Today Jews are not permitted to pray on the Temple Mount. Today the UN won’t even call it the Temple Mount. Today enemies that make the ancient Greeks look noble attack Jews at prayer and at bus stops, with arson and with rockets. We see lives destroyed and nothing gained. No miracle to advertise. At least, not yet.

Some historians link the Maccabean war to a conflict between the two main Jewish groups of that time – the traditionalists and the Hellenistic assimilationists who wanted to be just like the Greek overlords. The Maccabees’ victory put a Kohen Gadol – a High Priest – once again in control of the Temple and its public. In the succeeding years, however, they compromised with the Hellenists, thus turning the Talmudic sages against them. Rather than glory in the Maccabees, the religious leaders insisted that Hanukkah was only about the 8-day jug of oil, and actually mention it in only one paragraph of the Talmud. The miracle of the oil thus outlasted the thrill of victory. Jewish unity was as problematic then as it is now.

So, until we get a new miracle, the best we can do is celebrate the old one. We can do so with songs and with latkes and sufganiot, with joy and with hope. We can enjoy advertising the miracle of Hanukkah once again.

Have a Happy. Anyway. 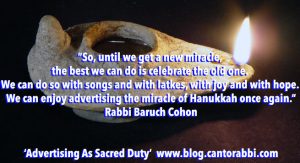