The very first word of this week’s Torah reading sparked a fascinating comment from Rashi. That word is vayeytzey, “he went out.” The Torah tells us that Jacob left Beer Sheba and went to Haran. Since the Torah does not waste words, Rashi points out that what needed to be written here was only “Jacob went to Haran.” To go to Haran he had to leave Beer Sheba, didn’t he? So why do we read “Jacob went out of Beer Sheba?”

Rashi’s answer teaches a lesson. Namely, ”when a righteous man lives in a city, he is its glory, he is its guiding light, he is its honor. Once he departs, glory departs, light departs, honor departs.”

Certainly a city will miss its most honored resident, male or female. Rashi compares Jacob’s exit to that of Naomi and Ruth, mentioned in the book of Ruth 1:7. To which the Midrash adds the comment of Rabbi Azariah: “The merit of one righteous person is incomparable to the merit of two righteous people.” Depending on the individual, our decision to stay where we live, or to go somewhere else, can affect not only us but the place itself. Moving has various results.

An old Jimmy Durante comedy number went like this: “Did ya ever have the feelin’ that ya wanted to go, and still had the feelin’ that ya wanted to stay?” I would guess that Jacob himself had both feeings. And perhaps some people in Beer Sheba missed him and some did not. But he had very little choice. If he stayed in Beer Sheba he was in mortal danger from his violent brother Esau. And while Haran was no bed of roses, given the machinations of his tricky prospective father-in-law Laban, it did offer opportunities.

So he went. And starting from that trip, he succeeded in building the future of our people. Later generations had equally momentous choices to make. The Immigrant Generation – our parents and grandparents – had to leave places where they lived much longer than Jacob lived in Beer Sheba, and take a much longer trip than the few days to Haran. They left countries where they lived for centuries and travelled by land and sea over half the world to America. Whether it was Beer Sheba or Bialystok, maybe the places they left missed them; maybe they missed those places. And maybe not. And whether in Haran or Hartford, like our father Jacob, they built a brighter future. For us. 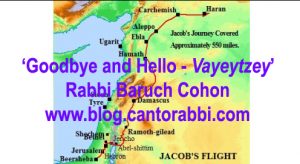