Rivalry among siblings is nothing new, as we all know. We find some classic examples of it in the Torah. Starting with two-son conflicts like Cain and Abel which leads to humanity’s first recorded murder, we proceed to those negative contacts that are only slightly more subtle. A few weeks ago we read about the birth of Ishmael who is described in advance as a “wild man, with his hand on all and every hand against him.” When his little half-brother Isaac is born, Ishmael can only laugh at him. Of course, it’s no joke when their father Abraham performs the first bris-milah – the ritual circumcision. Isaac is just 8 days old – the age at which Jewish boys still enter the covenant physically. But Ishmael is a maturing 13 years of age, and has to undergo the operation on the same day. Many of his descendants still do. (Could that be what makes them so mean?)

This week, another pair of brothers interacts. These are Isaac’s twin sons, Jacob and Esau. As described in the Book of Genesis, they fight their way into the world, as Esau manages to exit first from Rebecca’s womb with Jacob, still scrappy, holding onto his brother’s heel. Now those few seconds of seniority give Esau a distinct advantage, as the two brothers mature and their father is getting old. That advantage is the birthright, giving the first-born a double portion of the inheritance, and a special place of honor in the family. Throughout his life Esau is known as an outdoorsman and expert hunter, while Jacob is called “a simple man, dwelling in tents,” interested in farming and learning. Their climactic scene comes when Jacob has just prepared his own lunch – a reddish stew made of lentils – and in dashes Esau from the field, tired and hungry. Apparently he did not bag any game today. He takes one look at the pot on Jacob’s stove and says “Give me some of that red, red stuff. I’m about to pass out!” Jacob agrees — if Esau will trade his birthright for it.

“Here I am, dying of hunger,” says Esau. “What do I need with a birthright?” So he agrees.

Jacob serves him bread and a bowl of pottage. The next five words tell Esau’s action, and serve to give us what one rabbi called the portrait of a boor. Here are Esau’s five words:

Va-yi-vez – He despised [the birthright].

Hardly an example to look up to. Note what this compact narrative does NOT include: (1) Esau does not thank his brother for the meal; of course, why should he? He’s paying for it. (2) Esau also does not pronounce a blessing when he eats.

We know what he eats, but what does he drink? Well, a respectable host like Jacob can be assumed to provide a cup of wine with a meal, even though the Torah does not mention it.

He stands up and walks out and never even says goodbye. And he despises the birthright and the whole process because, as one commentator writes, he saw no wealth in his father’s house, so what does he care about an inheritance? Double portion, sure. Twice nothing? He got his lentil stew. Never mind the birthright.

Every father and mother from the time of Isaac and Rebecca onward can face similar problems. We would all choose to have children who get along well, help each other and hopefully like each other. It doesn’t always happen. In the case of the family in our Torah portion, the parents themselves took some steps that we might learn from.

Isaac preferred Esau who brought his father good venison. As his eyes dimmed, so did Isaac’s discretion about his two sons and their contrasting personalities.

Rebecca loved Jacob because he spent time with her in the tent. So, being somewhat of a super-mom, she insisted on Jacob disguising himself as Esau to fool his father into giving him the blessing of the firstborn. Then she bundled him up and sent him to her brother’s house to escape Esau’s threat, and incidentally to find two wives.

If their parents never took sides, would Jacob and Esau eventually draw together? The reality is, of course, that we’ll never know. Jealousy and conflict split families ever since those days. Blessed are the families that can avoid such a split. Blessed are the heirs who do not squabble over their inheritance. Blessed are the siblings who can accept each other for what they are, not what #1 thinks #2 ought to be. And blessed are the parents who have the good sense to treat their children equally.

Let’s try to make each of our families one of them. 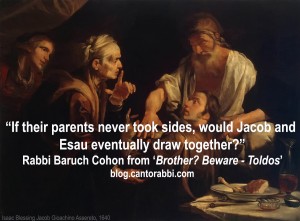