As we read the one-and-only story of an entire nation getting certified by G-d Almighty, with Moses ascending Mount Sinai amid thunder, lightning and smoke, we might expect this week’s reading to be named for Moses. It is not. Instead, it bears the name of Moses’ father-in-law, Jethro, a heathen priest of Midian. When he heard about the miraculous events of the Exodus, he determined to cast his lot with his son-in-law and the people of Israel. At the beginning of this week’s reading, we find him giving Moses practical advice: Don’t wear yourself out judging all these people’s petty grievances – appoint some able G-d-fearing truthful men, men who hate unjust gain, and make them rulers of thousands, hundreds, fifties and tens. Let them bring you the hardest cases, and let them judge the rest. Moses gratefully takes the advice, and Jethro goes home. His vision, his wise counsel, qualifies him to give his name to this climactic Torah portion.

Now Israel arrives at Sinai. All through the centuries, thinkers wondered why this rather minor mountain became the place where mankind would meet G-d. Located in desert country, it is usually identified with Jebel Musa, where a wide plain spreads below it, offering enough space for the Israelite camp. Remember Moses led 600,000 men of military age, plus the women, children and old people – plus the eyrev rav, the hangers-on who left Egypt with them. Estimates of the total population number 2 to 2.5 million. And they had animals too, so they needed plenty of camping space. But more than that, they needed purpose.

Against all probabilities, they got out of Egypt safely. That purpose was physical freedom, and they accomplished it. What now?

Moses climbs the mountain and hears the Divine call: “Speak to beys Yaakov, the House of Jacob, and tell b’ney Yisroel, the sons of Israel..” Who were these two entities? Our commentators tell us that the House of Jacob refers to the women, and the Sons of Israel to the men. Indeed, today we frequently find schools for Jewish girls called Beys Yaakov. The message went to the women first, as they would teach it to their children and extend it into future generations.

What is the message Moses is charged with? “If you will listen, and keep My covenant, you will be My treasure among all nations, for all the earth is Mine.” And the people agree! For once, the answer is unanimous.

Now they are given time to prepare for the covenant that will make Israel a singular nation. “Sanctify yourselves today and tomorrow. Wash your clothes… Be ready for the third day. Don’t go near a woman.”

How’s that again? Is this an ancient “war on women?” Exactly the opposite, as Rashi explains quite graphically. Abstaining from sexual contact for those 3 days would ensure that the women would be ritually clean to receive the Torah.

While tradition holds that all 613 Mitzvos were received on that third day, all the text gives us here are the “big 10.” Significantly, they are not called Commandments in Hebrew. They are called aseres hadibros, literally “ten statements.” These are principles of right and wrong, Divinely authorized in #1 and #2, and detailed in the other 8. Honoring your parents is right. So is resting one day a week. But murder is wrong – and the text definitely reads “thou shalt not murder,” not “thou shalt not kill.” Just as wrong are adultery, theft, false witnessing, and that puzzling word “covet,” the urge that comes from jealousy, the desire to have what someone else has, the obsession that leads to crime. These are not ritual observances. These are basic standards of human conduct. How can we justify removing Ten Commandments monuments from our courthouses today?

Next week Moses will receive the practical do’s and don’t’s, and their corresponding rewards and penalties, and we will read of some disturbing results among the people at the foot of the mountain. But for now, hearing the Big Ten in shul, let’s stand and receive these eternal principles once more, with respect and gratitude for our distant ancestors, just 3 months out of slavery, who could accept the role of teaching truth to the world. 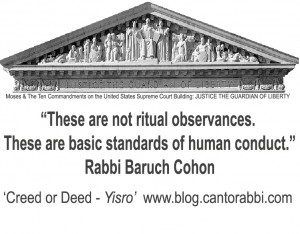