This week we will read of an angel leading the Israelites out of Egyptian slavery. Reaching the Red Sea, the angel moved to a position behind them. And a pillar of cloud came between the camp of Israel and the camp of Egypt. The cloud thickened the darkness and cast a spell on the night. “One could not come near the other all night,” says the Torah.

Rashi explains this to mean that that the Egyptians and the Israelites could not come in contact with each other. But the Klee Yokor commentary suggests that this refers to the Israelites themselves. He cites the Talmudic statement in the tractate Taanis 2.5:

The Korban hoEydoh commentary identifies the first faction as completely righteous, the second as completely wicked, and the other two as in between.

Our ancestors already had those problems. Sounds familiar? There they were, desperate slaves, on the run, facing a crisis of life or death. And they could spend a whole night arguing. Moses had to answer four factions at the same time. What even he couldn’t quite cope with was the sarcasm in their first question:

“Weren’t there enough graves in Egypt? You had to take us here to die in the desert?”

So even after answering the four factions, Moses still needed Divine help. He asked for that help. And what kind of answer did he get?

“The L-rd said to Moses: Why do you call out to Me? Tell the Israelites to go forward.” A famous Midrash tells us that the people still hesitated until one man, Nakhshon ben Aminodov, stepped into the water. Then the Sea divided. Then miracles took place – to such an extent that we are told: “What a slave girl saw at the Red Sea, the prophet Ezekiel could not see.”

One man’s courage galvanized a squabbling mob into unity. Result: “Israel saw the power that the L-rd wielded against the Egyptians. The people feared the L-rd; and they believed in the L-rd and in Moses His servant.” Who believed? The people. All the people.

And now? Four factions. At least. One wants to jump in. “Build another settlement; G-d will protect us.” Self-proclaimed Tzadikim, 101% righteous.

Another faction says we should go back to Egypt. “Make peace – at any price.” Appease your enemies — like Neville Chamberlain.

A third says “Make war on them.” A last resort, not to be chosen lightly.

And the fourth says “Cry out – talk – negotiate,” even with liars who will never recognize your rights.

One faction cannot come close to any other faction. All night long. Maybe we cannot hope for a Moses in our generation. But could we ever use a Nakhshon! Someone who would get his feet wet to lead the way. Someone who could galvanize the squabblers into some kind of unified vision. Someone who could bridge the gap – really a chasm – that divides secular from religious Jews in Israel. Break down the wall between right and left among the Jews of the world.That would be a miracle, wouldn’t it?

The great hope is that miracles still happen. The State of Israel itself is a modern miracle, just by its existence. It will need another miracle for its survival. What can we do to bring about this miracle? Individually, very little. But every little bit helps. The first and most important contribution we can make is to accept each other. Not to turn our backs on another Jew, whether we agree with him or not. The Talmud tells the story of a wealthy nobleman who was hosting a dinner in his Jerusalem mansion, at the time of the Roman invasion. He told his servant to invite his friend Kamtza to the dinner. By mistake the servant invited a man named Bar Kamtza whom his boss hated. When the wrong guest arrived, the host was furious and threw him out, even though he offered to pay for whatever he ate. Bar Kamtza was sufficiently insulted that he proceeded to betray his wealthy enemy to the Romans, thus starting the destruction of Jerusalem. “Because of Kamtza and Bar Kamtza,” says the Talmud, “Jerusalem was in ruins.”

That kind of infighting we can avoid. Miracles begin at home.

Personally I don’t hope to be a prophet like Ezekiel. But to see this miracle – this survival miracle – I would feel as privileged as the slave girl at the Red Sea. Come back, Nakhshon, wherever you are! 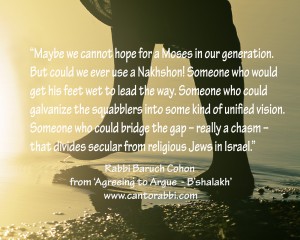