All through the Torah we learn about our responsibilities – to G-d, to ourselves, to the land, to our work, and to each other. This week’s reading will include a detailed list of those responsibilities. We should keep in mind that this is not a complete list, but it’s a good start.

Included here we find both positive and negative commands. They range from capital offenses to calendar celebrations, from how to treat a slave to what to do with an ox that gores. The name of this reading is mishpatim, “Judgments.” And its basic theme is justice. Here we will find the famous rule of “an eye for an eye; a tooth for a tooth,” a rule that was always interpreted to mean the economic value of that body part. Inflicting identical damage on the guilty does the victim no good, but paying for the damage is only right. Here we also learn that if a master inflicts that kind of injury on a slave, that slave must go free. In Torah times slavery was a recognized reality. But unlike the attitude elsewhere – then and ever since then – that slaves are merely property, the Torah insists on treating slaves as human beings. And lest we deceive ourselves that this is all ancient history, shocking current statistics reveal a number of slaves in the world today in the millions.

Reading the penalties listed for violating these rules, we observe that in Torah times jail overcrowding was not a problem. No long prison terms. Generally punishment consisted of either economic penalties like fines and damage payments, or physical punishment – whippings or beatings, limited to 39 lashes – or banishment, or execution. In the case of lesser religious violations, the guilty party had to bring a sacrificial offering.

Some penalties do not appear here, but will show up in the Book of Leviticus. For example, here we find execution mandated for sorcery and for bestiality. Not for other offenses, such as those described in Leviticus, including adultery and homosexuality where both violators got the death penalty. Actually, fewer executions took place than we might expect, since the Torah requires two credible witnesses in order to convict and impose the death sentence. And this week’s reading includes strict standards for honest testimony.

Worshiping a false god is punished with “destruction,” which is understood as “death at the hands of Heaven” rather than execution by human methods. Those methods were stoning, burning, beheading and hanging. Violent action only, not poison or starvation. Today presumably, the Torah would favor the firing squad over the lethal injection. In murder cases, Torah justice recognizes the ancient practice of goel ha-dam – “the redeemer of blood” – closest relative of the victim, who had the right to avenge the death by killing the murderer. And here we find an immediate reference to the case of an accidental unpremeditated killing, where the innocent killer should have a place to go and be safe from the avenging relative. Cities of refuge were in fact established for this purpose both east and west of the Jordan, as detailed in later readings.

More outstanding than all the penalties are the moral imperatives set forth in this week’s reading. If someone digs a pit and a man or an animal falls into it, whoever dug that pit is responsible for the injuries. Give a tool or an animal to your neighbor for safekeeping, and that neighbor assumes responsibility to return your property intact. And “do not take a bribe, for a bribe will blind the sharp-eyed, and pervert the words of the righteous.” Practical rules to live by. Our sages never stopped exploring rules like these. The Talmud sets forth many imperatives that do not appear in the Torah at all, but became part of Jewish law, based on the principle of tikkun ha-olam–“repairing the world.”

Repeated several times in the Torah, including this week, is the message: “Consider the stranger, for you were strangers in Egypt.” Not stated but understood is the result: You know what happened to you –slavery and persecution; you didn’t deserve it; don’t do it to others.

Truly this is a section worth reading and learning. All four chapters. 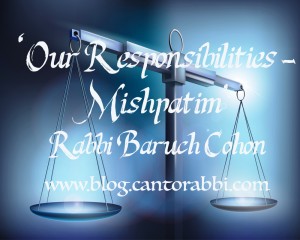