This week as we read the section that details all the various structures that filled the first Jewish house of worship, we will be observing the first Sabbath in the month of Adar. Actually in this leap year we have two months by that name, this one being Adar Rishon – Adar Number 1 and it begins this week. The Talmud teaches us: Mishe-nikhnas Adar marbim b’simkha – “When Adar enters, we increase joy.” Adar is the month of Purim, our happiest holiday. And as if to build that increased joy even more, we will celebrate Purim on the 14th of – not Adar #1 but Adar #2, which this year coincides with the 24th of March. So we have six weeks to get in the spirit. As the old pop tune put it:

Accentuate the positive,
Eliminate the negative, and
Latch on to the affirmative,
Don’t mess with Mr. In Between.
You gotta Spread joy up to the maximum
Bring gloom down to the minimum
And have faith, or pandemonium’s
Liable to walk upon the scene.
To illustrate my last remark,
Jonah in the whale,
Noah in the ark,
What did they do, just when everything looked so dark?…

Of course they accentuated the positive! Between Noah and Jonah, historically, came the Exodus generation, free at last to furnish their Tabernacle and build their faith. Our faith.

No downtrodden slave group could create the portable splendor described in this Torah portion, and certainly no defeated invaders could construct the magnificence of Solomon’s Temple as told in the Haftorah. Our ancestors were expressing joy and gratitude for their victories. Particularly so in constructing the Bais haMikdosh – literally “home of holiness” — on Jerusalem’s Temple Mount. Let our enemies deny its existence, among the other lies they tell. Here is a detailed record of its construction, including the civilian draft that sent young woodcutters to Lebanon for a month at a time to work with the foresters of King Hiram whose treaty with King Solomon provided cedars for the sacred building. One month in Lebanon and two months at home, the draftees kept their schedule – some 30,000 of them, 10,000 at a time – in addition to 70,000 porters and 8,000 stone quarriers. This was a national undertaking in every sense.

As recounted in the First book of Kings, Solomon completed this magnificent structure, glorifying the Name of G-d, and received the Divine message reminding him that as great and beautiful as the Temple was, it just reinforced the Mitzvos, the commandments that set a standard for human conduct, for the ruler as well as for his people.

Symbolic of the Temple’s function were the windows. In the thick stone walls, those window openings were different from the ones in other buildings. Unlike windows built narrow on the outside to shield from bad weather, and wide on the inside to maximize light, the Temple windows were narrow inside and wide outside because G-d’s house would radiate light to the world around.

As we build our joy toward Purim, let’s radiate the positive feeling to those we love, and to the world around us. Happy Adar #1. 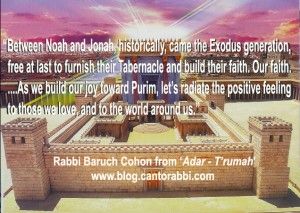