Most of this week’s Torah reading describes the vestments that Aaron wore as High Priest. Now that Israel had a Tabernacle dedicated to Divine worship, a head functionary had to take responsibility for that worship. Aaron was given that position. He would kindle the Eternal Light. He would offer his people’s sacred sacrifices. Why Aaron? Just being the brother of the national leader Moses would seem like plain old nepotism.

In fact, we learn of important situations that contributed to Aaron’s choice. First, he was chosen after Moses is commanded to “bring him near you” (in chapter 28:1) along with his four sons. The Ibn Ezra commentary explains that Moses himself was a priest, so Aaron becomes one by close association with Moses. After all, Moses led the people to receive the Torah; Moses accepts the commandments to build the house of worship; Moses teaches the people their relationship with G-d. So it is Moses who essentially ordains Aaron and his sons with hereditary priesthood.

That heredity, of course, continued throughout our history. The Malbim commentary deduces that G-d selected Aaron to function as an intermediary between the human and the divine, and that Aaron qualified because of his “unique soul,” a quality that his sons and their descendants would inherit. Does that mean that my sons and I have such great unique souls? After all, we are descendants of Aaron. The modern DNA Cohanim Project proved it scientifically. That’s why we carry the priestly name, however it is spelled. What about Mickey Cohen? Also a unique soul? Qualified to stand between G-d and man? True, none of us now need to consider ourselves intermediaries to G-d. That status ceased after the Destruction of the Temple. Modern Cohanim are limited to some ceremonial duties and privileges. But the word – and the name – cohen still implies definite religious distinction. So do some other Jewish names, like “Katz” – not meaning a cat, but derived from the initials for the Hebrew words Kohen TZedek, “A righteous priest.”

So why did Moses ordain Aaron? Did Aaron need to reaffirm his family connection to the national leader? According to our sages, it was the other way around. Rashi informs us that this story appears somewhat out of order in the Torah. Eyn mukdam um’ukhar baTorah, say our sages : “There is no before and after in the Torah.” And this choice of Aaron actually took place after the idolatry of the Golden Calf when the enraged Moses broke the first tablets and received the second set of Tablets of the Law. For committing that idolatry, Aaron deserved death, but as the Klee Yokor states, Moses prayed for the brother that he felt he could not live without, and so brought Aaron close to him and obtained for Aaron and his sons Divine forgiveness and a second chance.

We will soon be reading how two of Aaron’s sons violated that second chance by bringing “strange fire” to the altar, and got burned to death. Certainly priests can make mistakes, sometimes very serious ones. But if they don’t continue their mistakes, they can be restored to duty, as we all can.

Perhaps there is another factor to be considered in this episode of Aaron’s selection as High Priest. Going back to Ibn Ezra’s opinion that Moses was also a priest, can we learn here that to serve as a head of state and to serve as a religious leader are two very different roles? We read of Aaron as Kohen godol – the High Priest. Moses is called Moshe rabbeynu – Moses our master. Even though Moses was a priest, he had different duties. Other human societies are known to combine the roles of king and prophet. Not Jews. Just think of King Saul’s relations with the prophet Samuel. Or David’s with Nathan. The prophet dared to function as the king’s conscience. When he succeeded, justice was done. Moses led our ancestors to freedom and nationhood. Now it would be Aaron’s job to try to elevate them to their ideal role as a mamlekhes kohanim v’goy kadosh – a kingdom of priests and a holy nation.

Today’s Kohanim no longer function as prophets, or sole religious leaders. But the goal is still there. Each in our own way, let’s do our best to lift the growing generations to a higher spiritual level. 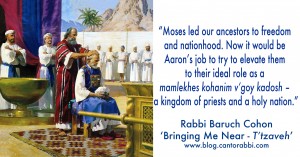