“When you count the sons of Israel,” Moses is told, “let each man give a ransom for his soul.” What goes without saying here is that it is not a direct count. Our commentators provide the explanation that counting people directly can activate the ayin hora – the Evil Eye. In the effort to avoid that mystic disaster, our people found various ways to count each other indirectly. The synagogue shamas must make sure a minyan of 10 qualified Jews is present for services, so he recites the Biblical verse that begins Hoshiah es amekha (Save Your people), which contains exactly 10 words, while visually indicating one man per word. And if Grandma wanted to know that all the children were assembled for dinner, she would talley them saying Nisht eyns, nisht tzvey… (Not one, not two, etc.).

So in this week’s reading, Moses must ask for half a shekel from each Jew as a kofer nafsho (a ransom for his soul), and by counting the coins he could arrive at a census. Just half a shekel. This is not a fund-raising effort. Specific orders demand that “the rich shall not increase [the amount] and the poor shall not reduce it.” This half-shekel coin is called “an offering to G-d” because, says the Klee Yokor, it makes rich and poor equal. A rich man cannot brag to his poor neighbor: “Look, I gave so much more than you did.” Implying, of course, that his gift makes him important. Like a PAC contribution.

Yes, this is a count. But we must note that it is not a national census. The population is numbered tribe by tribe elsewhere in the Torah. Here we see no total figure. Rather than a census, we should call this registering for the draft. Men 20 years old and up are the only ones included. These are the future soldiers who will fight to conquer the Promised Land. As the Hertz commentary points out, “this word ‘ransom’ occurs only three times in the Torah, and each time it refers to the money paid by one who is guilty of taking human life in circumstances that do not constitute murder. Thus, the owner of an ox who killed a man, after the owner was warned that his animal was dangerous, was held responsible; but as his crime was not intentional he was permitted to pay a ransom. Such a ransom was forbidden in the case of deliberate murder… The soldier who is ready to march into battle is in the eyes of Heaven a potential taker of life, though not a deliberate murderer. Hence he requires a ‘ransom’ for his life.”

What we may find odd in this situation is the use to which the ransom money is put. No weapons will be purchased with it, no intelligence operations financed, no military officers hired. This money will go toward the construction and care of the holy Tabernacle, led by the expert craftsmen Betzalel and Oholiav, as described in this reading. All the future draftees who just got counted will be expected to learn the Mitzvos, like Sabbath observance which is detailed later in this reading, and observe them, with just as much devotion as they will show by risking their lives for their G-d and their people in the battle for the Land.

Of course the most famous section of this reading is the story of the Golden Calf, which our sages tell us happened somewhat earlier. One minor episode in this story is worth our attention here. After Aaron capitulates to the people’s impatience and builds them an idol, then announces “a holiday tomorrow,” the people spend the next day bringing offerings to the Calf, and sitting down to eat. And to drink. Then vayakumu l’tzakhek – “they rose up to make merry!” Considering their inebriation, Rashi gives us some implied meanings for that word l’tzakhek: 1-sexual promiscuity, as Potiphar’s wife used the word when she accused Joseph of attempted rape; and 2- bloodshed, as brought on during the struggle between Saul and David when the corrupt generals Abner and Joab set up a supposed entertainment by the young recruits, which becomes a massacre. Comparisons like these illustrate the depraved nature of idolatry, and how it prompted Moses to shatter the tablets and to threaten the idolaters with death. Only after deep trouble, after the many casualties caused by the Levites’ attacks, after Aaron’s rehabilitation and Moses’ own soul searching, could he go back up the mountain and receive the second set of Tablets of the Law. This time, he achieved such close contact with the Divine that his face shown with a beacon of light, frightening those who saw him. We will read how Moses had to wear a veil in camp after that.

Among the profound and famous passages in this week’s reading, we must not overlook the Thirteen Attributes – sh’losh esreh meedos – which we repeat while facing the Ark on all major holidays: “The L-rd, the L-rd is G-d, gracious and merciful, patient, with great kindness and truth. He vouchsafes kindness to thousands [of generations], forgiving iniquity, transgression and sin. By no means clearing the guilty, He will visit the iniquity of the fathers upon the children and the children’s children to the third and fourth generations.” Note that in our prayers we never finish the passage. We express our hope by stopping before the punishment predicted in the last sentence.

Do we have that much hope? A quick look at Jewish history can confirm both the favor and the punishment we know. Maybe we just need to join equally in that half-shekel registration, and remove Moses’ veil. 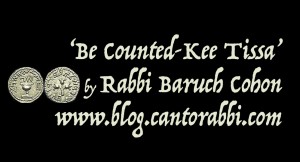