The Book of Numbers ends with two contrasting sections, which are frequently read on the same Sabbath in the synagogue.

First comes Chapter 30-32 which centers on the Israelite tribes in relation to Moses and his leadership, and their experiences in war. Here it is:

Punishment, revenge, anger – all motivate the story we will read in this section called “Mattos,” literally “tribes.”  The heads of the Israelite tribes hear Moses call for 1,000 fighting men from each tribe – including his own tribe of Levi which otherwise does not provide soldiers but only chaplain’s assistants.  This is to be Moses’ last battle, and he is told he must conclude it before being “gathered to his people,” the beautiful Biblical euphemism for dying.  Even when facing his earthly end, Moses responds gladly.  We can expect this to be a highly important battle.

The military operation has a specific purpose, namely to punish the people of Midian.  To execute “Divine revenge” on them is how the Torah phrases it.  The sexual epidemic that took the lives of thousands of Israelites was engineered by the false prophet Bilaam.  Remembering how that all started with the Israelite men getting seduced by the “girls of Moab,” we might wonder why the revenge is not ordered against Moab.  True, Bilaam himself was a Midianite, but what about those girls?  So let’s go back to Chapter 25.  There we find the violent action Pinhas (Phinehas the priest) took to stop the spread of the epidemic.  He saw a grandee of the tribe of Shimon take a woman into his tent, and Pinhas proceeded to grab a spear and strike them both fatally, through the tent. Who was this woman?  Her name was Cozbi, daughter of a prince of Midian. Not Moab.  Midian.   Conceivably Bilaam saw an opportunity to destroy Israel with poisonous orgies, and brought in his own female operatives to carry it out.

Another reason for not attacking Moab, says Rashi, is because Divine punishment is withheld in consideration of one great woman who will come from there to join Israel and bring it glory.  Her name was Ruth, whose name and story grace a book in the K’tuvim (“Writings”) section of the Bible.  Ruth set the pattern for all future converts – “Your people shall be my people, and your G-d shall be my G-d” – and became the ancestor of King David.

So Midian gets attacked.   Indeed it gets destroyed.  The Israelites besiege Midian, wipe out the male population, execute the kings, kill Bilaam, and take the women and children prisoners.  Quite a complete punishment, right?

Did Moses himself commit a sin here?  The “Arizal” teaches that anger is a most dangerous sin. In his mystical thinking, when someone becomes angry his soul leaves his body and gets replaced with an “external soul.” Anger can make one forget all his Torah learning, misled by that external soul.  Spurred by his anger, did Moses insist on a mass slaughter of defenseless people?  Was this some kind of genocide?  Or did he give this order in desperation, hopeful that this, his last battle, would guarantee his people’s survival?

Just maybe, our teacher Moses recognized in Midian the kind of dangerous deceit we see in some of our enemies today.  Executing the leaders is not enough.  Eradicate the source of the danger, whether or not that source is female.  Just maybe, that last battle set an example that every free people needs to remember.

The second section, which closes the Book of Numbers, is a good deal longer, and includes a review of the Israelite travels through the desert.  In fact it is called “Mas’ey” (“Travels”).

In Chapter 33, we can read the itinerary of every time they broke camp, and where they pitched their tents next.  The Gutnik edition of the Pentateuch – the Chabad chumash – prints a few maps of their progress, showing changes of direction that are not evident in the Biblical text.

The first 12 moves go south, from Ramises near the Mediterranean to Mt. Sinai near the lower end of the Sinai Peninsular.  There, of course, they received the Torah.  Then they spend the next 5 weeks moving northeast to Kadesh Barnea.  For the next 18 years they will be wandering through the desert, in and out of Kadesh Barnea, until Journeys #35-42 take them east and then north to prepare for crossing the Jordan River at Jericho.

Experiences and instruction during those years should equip our ancestors to conquer and settle the Promised Land.  One unique commandment they receive for that process is fully described in Chapter 35.  This is the rule of the City of Refuge.

From Cain’s murder of Abel, on throughout the Bible, violence and justice recur.  Rules like “One who sheds the blood of man, by man shall his blood be shed” establish the ultimate punishment for the ultimate crime.

The Torah even recognizes the ancient practice of the avenger, called the “blood redeemer,” who took responsibility to kill whoever killed his kinsman.  Of course the court required two eye witnesses to confirm guilt.  Two or three, never just one.  And no circumstantial evidence was considered. Even that standard was extended to require that someone warn the killer before he struck.  After a court convicted a murderer, the ancient custom still gave this blood redeemer the right to execute him.

But suppose the killing was an accident? Manslaughter, yes, but not willful murder?  This Torah section cites the classic example of two men who go to the forest to chop down trees.  One swings his axe, and the iron head flies off the wooden handle and kills his friend. Shall he be exposed to the vengeance of the victim’s brother?  After all, says the Torah, “he did not hate [the victim] yesterday or the day before.”  No premeditated crime here.  No crime at all, really.  A tragic accident.  And so in two passages – one here in Numbers 35 and one in Deuteronomy 19 – we find the commandment to designate Cities of Refuge where the inadvertent killer can go and be safe, and the blood redeemer cannot follow him.  The Hebrew text calls these cities a-rey miklat.  The word miklat (refuge or shelter) is used in Israel today for an air-raid shelter.  Moses set up three such refuge cities east of the Jordan, and the people were to add three more after entering the Land.   There the manslayer could flee and stay, until the death of the current High Priest, after which time the blood redeemer would have no further right to take his life.

These ancient laws give us a handle on some basic concepts of right and wrong, fairness to the suspect, and at the same time a realistic way to deal with primitive human emotions like revenge.  Surely that poor fellow with the faulty axe faced an awful change in his life, from independent woodsman to cooped-up fugitive.  But he was alive. And the victim’s brother had to deal with his family‘s loss without a violent vengeance that certainly could not bring back the victim of that tragic accident.

Ancient history?  Sure.  Or is it?

If you go to Hawaii, take a little excursion to some of the state parks, and you will likely find one of them in a cave that is accessible only by water.  I found that one particularly interesting.  Getting out the boat, we walked through the cave and saw a diorama that an artist executed on one wall.  It showed that cave’s importance to the old Hawaiians.  The cave was a special place where a fugitive killer could go and be safe – until the death of the Big Kahuna.  Big Kahuna = Cohen Gadol =High Priest.

Unbelievable, I thought.  An exact parallel to the Torah’s Cities of Refuge!  So I contacted an old friend of mine, Rabbi Julius Nodel of blessed memory, who at that time was the only rabbi in Hawaii, and we talked about it.

“That’s not all,” he told me.  Not only does “kahuna” sound like “cohen,” but a University of Hawaii researcher found some 500 words in the Hawaiian language that have parallel sound and meaning to those same words in Hebrew.  Like “makana” – a gift.  Hebrew word: “matana” – the Hawaiian language substitutes K for T since it has no T sound.  How did all this happen?  Are the Hawaiians the mysterious lost tribes of Israel?  Not exactly.  But some historians deduce that when Polynesians adventured north to explore and later populate the Hawaiian islands, they had to cross many hundreds of miles of open ocean, and they needed some skilled navigtors.  At that time, the best navigators in the Pacific were Jews, refugees from European massacres now living on the Chinese coast and very available.  They piloted the Polynesians, and apparently some stayed with them in their new Hawaiian home, and left their mark.

Including the Refuge Cave – the miklat – a safe haven for killers! 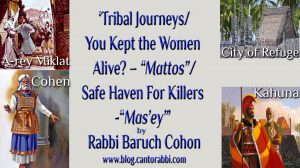