This long section starts as Moses recalls praying to be permitted to enter the Promised Land.  Our Midrash notes that there are ten different words for prayer in the Torah, and here Moses uses the one that appeals to Divine grace.  “Have mercy and let me in, even if I don’t really deserve it.” There he was, our greatest leader, the man who brought our ancestors to freedom and to G-d, and his prayer is denied. What must his reaction be?

He is refused, but he accepts his fate, and then turns to remind his people why they are called a “wise and understanding nation.”  It is because of the laws they follow, the Torah they received at Sinai.  That’s where they showed they could listen.  Mitzvah was the message, and they accepted it.  Reviewing their progress from slavery in Egypt to nationhood, Moses cautions them to continue keeping the Law.

Then he attends to a matter of administration. He designates Cities of Refuge, where a fugitive accidental killer can go and be safe.  This is just a reminder, since the same Cities of Refuge were described completely in the last chapters of the Book of Numbers.

Now Moses launches into his second oration to his people. Yes, it is long.  Long, but worth reading.  Both dramatic and basic to our understanding of Judaism, this reading includes:

Pitfalls await the conquering Israelites, and Moses describes them vividly. They will take over great cities that they did not build.  They will inhabit houses full of good things they did not produce.

Maybe those so-called “seven nations” they are replacing knew something they didn’t know?  Maybe those tribes had a better way of life?

Forget it, he tells them: “Not because you outnumbered all the other nations did G-d value you and choose you.  You are the smallest of the nations.  Because G-d loved you, that’s why He rescued you from Egypt.”

Moses held history to witness how the Almighty took one nation out of the midst of another nation – to choose it and make it holy.  Looking at history from Moses’ time until now, we must face the fact that individually and collectively our people repeatedly proves the Divine choice.  Despite tragic losses as the “fewest,” we survive, and we progress.  Current enemies may want to wipe us out, but they won’t.  Nobel prizes, startup industries, topflight arts and literature, or sacred truths – you name it, we are there.  No, being chosen does not mean others are doomed, or even inferior.  They are not.  It just means we have an identity to give thanks for.

Pride in that identity is, in its own way, a Mitzvah. 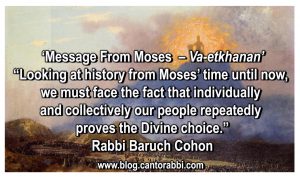