Just 50 days after crossing the Red Sea, our ancestors receive the Torah at Mount Sinai.  One event gave them physical freedom.  The second made them a nation.  The Torah is sometimes described as our Constitution – not a document debated and decided by a select group of leaders and then presented to the people, but a Divinely dictated Code revealed to the entire nation, some 2 million strong, all at the same time.

Our sages always insisted that the entire Torah was revealed at Sinai, all 613 commandments.  But it’s the Big Ten – the headliners — that appear in this week’s reading, and Sabbath congregations all over the world will stand once again to hear them read, just as we learn our ancestors stood to receive them at the foot of the mountain.  They prepared for this experience for three days, washing their bodies and their clothes and refraining from sex.  Maybe we don’t take such measures, but we might well consider some mental preparations.

Certainly we have no lack of commentary about the Ten Commandments.  Enough has been written about them to fill many libraries.   Let’s take note of just a few points regarding these famous words.

When Moses takes his preliminary climb up the mountain, he brings down the challenge: Will you, the Israelite people, accept G-d’s will?  And the Torah tells us that the people answer “as one” saying “all that G-d tells us we will do.”  So all those 2 million ex-slaves are ready to unite.  The Jewish nation is one, and its G-d is One.  Receiving the commandments is a One-on-one experience.

So the commandments are spoken to all the people.  Yet they are phrased in the singular.  Because they apply to each of us individually.  In the classic translation, it is not “Ye shall not murder.”  It is “Thou shalt not murder.”  And a special note on that one: the word is tirtzakh – murder.  It is not taharog – kill.  From the very beginning, Jewish law recognized that killing is not always murder.   Self-defense, capital punishment and war all involve violent death, in fact we have the principle “he who sheds the blood of man, by man shall his blood be shed.”  Historic methods of execution were far harsher than some modern ones, but the principle did not change.

By the same token we can well ask whether any of the principles of Sinai ever changed.  True, in recent years the Ten Commandments became Politically Incorrect to some people.  Those who would like to banish G-d from our lives like to quote the First Amendment: “Congress shall make no law respecting an establishment of religion.”  They cite church-state separation as a reason to remove the Big Ten from public buildings.  This despite the fact that these commandments mention no “establishment of religion,” but constitute an eternal statement of right and wrong.    Even the first commandment says simply “I am the L-rd your G-d.” It does not say “the L-rd your Jewish G-d….  or your Catholic G-d… .   or your Hindu G-d..  etc.”  And of course a plaque on a wall, or a monument outside a courthouse, does not involve an act of Congress.  Chances are, we can still expect to see the great text in many American places reminding us of the principles we share with our fellow citizens.

These principles form the entry to a life strengthened by Torah and Mitzvos, a character marked with what my father z”l called “ethical consciousness.”   One particularly telling comment in this connection appears in the Mishna Kidushin: “One who is at home with Scripture, and Mishna, and honest dealings with fellow creatures, will not readily sin.  As it is written (Eccl.4:12): ‘the triple cord will not soon be broken.’”

Indeed, those who live by our ancestral teachings, and use them to treat other human beings fairly, have the best chance to achieve a good life.  Our noble Commandments give us our basic guide.   As Moses’ generation said, “We will do and we will listen.” 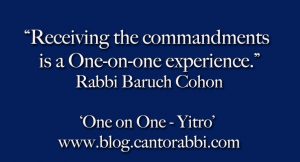