Following last week’s spectacle of receiving the Torah, with the people hearing the great principles of the Ten Commandments resounding from Mt. Sinai amid sacred smoke, this week’s reading brings us many details on how to implement those principles.  Truly brings us down to cases.

From the laws on dealing with indentured servants to how to observe the occasions of the Jewish calendar, from administering justice in lawsuits to avoiding prejudice, from legal responsibilities between individuals to instructions for conquering the Promised Land – a lifetime of learning in one week’s reading.  And it ends with Moses and Joshua climbing the mountain together to seal the holy Covenant.

Of all the details covered in this all-important section, perhaps one of the most significant comes in verses 2 and 3 of Chapter 23.  Here we will read about the process of making legal decisions.  The classic translation goes like this:

Clear enough?  Not quite.  Our commentators identify the “multitude” here – rabim in Hebrew – as the majority.   Since a Jewish court consists of 3 judges, a majority would be 2.   Not exactly a multitude, nor even a deciding quorum, says the Talmud.  In capital cases, the tractate Sanhedrin insists that where the court does not unanimously condemn the defendant to death, one judge can acquit.  The word translated “cause” in verse 2 is riv, usually spelled resh, yud, vet.  But in our verse 2, the yud is missing, so Sanhedrin calls the word rav, making the translation “do not answer the majority to turn [justice] aside.”  Thus by voting to acquit a defendant of a capital offense, a single judge can save a life.  A majority of one.  In civil cases, however, that does not work.  2 judges can convict.  Based on this ruling, Ibn Ezra observes that this one verse contains both a negative and a positive Mitzvah.   The negative, as we just saw, is “do not follow the majority to do evil.”  And the positive comes in the last 3 words of the sentence: aharey rabim l’hatos: “it is a Mitzvah to follow the majority” [if the majority is right].

Yes, the majority rules – with a big IF.  A vote, whether of a judicial court or an electorate, does not replace principles of right and wrong.

Among those same principles, in the very next verse we encounter the Torah’s way of dealing with one of our current bugaboos, Economic Inequality: “Do not favor a poor man in his case.”  If he is wrong, justice must still be done despite the fact that he is poor and we would like to forgive him.   That decision no judge and no court should make.  Any more than a big shot can be allowed to win a case based on his power, as we will read in Leviticus: “Do not glorify an important man.”

Dominant in our religious law is the maxim: Tzedek tzedek tirdof – “Justice, justice shall you pursue.”  Why repeat the word?  Because, our sages point out, rather than commit crimes to even a score, it is our duty to achieve justice by just means.  Not easy, but we have to keep trying.
One voice for justice can still be a majority. 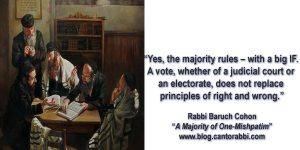