Another double-header week finds us reading two Torah portions, covering a wide range of subjects. Vows and how to fulfill them, journeys and battles in Israel’s progress toward the Jordan, exceptions and precedents to form the rules of inheritance – all are covered in these concluding chapters of the Book of Numbers. Among them we find a message that should jolt us.

The end of Chapter 33 brings us to a prophetic prediction that haunts Jewish history. On the bank of the Jordan at Jericho, G-d tells Moses to “speak to the people of Israel, and tell them: When you cross the Jordan into Canaan, you must drive out all the inhabitants before you. Destroy their idols and their shrines. Demolish their high places. Clear out the land and dwell there, for to you did I give the land to possess it. Divide the land by lot, according to the size of families. To the numerous give more, and to the smaller give less. According to your ancestral tribes, apportion the land.”

Then comes the warning. “And if you will not drive out the inhabitants, then those you let remain will become spikes in your eyes and thorns in your sides. They will harass you on the land where you dwell. And then, what I intended to do to them, I will do to you.”

Who were those “inhabitants?” Tribes called Canaanites, Hittites, Perizites, Hivites, Amorites, Jebusites, Girgashites. Where are they now? Maybe they just changed their names. Same function, but what do they call themselves? Hamas, Al Qaeda, Hezbollah, Fatah, and one ancient people called Philistines — extinct for centuries, only their name was adopted and latinized to “Palestinians,” first to accommodate the Roman Empire, then the Ottomans, then the British, and later to validate the genocidal ambitions of Yasser Arafat.

For Moses there was no “two-state solution.” Any more than there is now. As proven from his day to this day, when a war is fought and territory changes hands, those who live in that territory have a choice: accept the new reality, or move.

Presumably the Canaanites moved. Surrounding countries absorbed them. The difference, all these centuries later, is that the surrounding countries, their ancestral relatives and current co-religionists, refused to absorb the modern “Canaanites” and instead used them as a political weapon to do what none of them could do in battle but still hope to do by manipulating the UN – destroy Israel. While they pursue their plot, the “spikes in the eyes” and the “thorns in the sides” continue, otherwise known as rockets and suicide bombs.

In the Biblical campaign of conquest, Joshua in fact did not succeed in driving out all those tribes. Some remained to harass. Some even became resident aliens and accepted the Seven Mitzvos of the children of Noah. Unlike one John Kerry and several succeeding “diplomats”, they identified Israel as a Jewish state.

The thorns-in-the-side had to be expelled again and again. But the ancient Israelite rulers did not take their most sacred spot — the Temple Mount – and turn it over to their enemies. Results include recent “spikes in the eyes” like the murder of Israeli policemen, even though they were not even Jewish but Druze citizens. And of course the UN denying the identity of the Temple Mount as a Jewish holy place.

Maybe some of our leaders needed to take another look at the warning at Jericho. 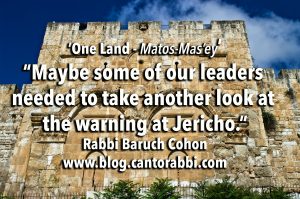