Deuteronomy, the last book of the Torah, consists of Moses’ three farewell orations to his people. This week we will read the first one, reviewing Israel’s travels and trials en route to the east bank of the Jordan river. A major challenge faced them in the person of Og, the giant king of Bashan. Moses recalls the battle at a place called Edrei. He also recalls G-d telling him “Do not fear him, because I give him into your hands.”

Fear him? Why should Moses fear Og more than the other kings who tried to block Israel’s progress?

We learn that Og was a last descendant of a race of giants. Like Goliath in the career of David, this huge creature struck terror into his enemies wherever he went. No man dared fight him. So he became the champion by default. In Og’s case, we even have the dimensions of the bed he slept on – an iron bed, because as the Ramban’s commentary explains a wooden bed would break beneath his weight. Nine cubits long by four cubits wide, we read. Since a cubit is defined as the distance from a man’s elbow to the tip of his middle finger, that makes it equal to about 18 inches, a foot and a half. Therefore Og’s iron bed was at least 13’ 6” long by 6’ wide. Clearly this man dwarfed a whole modern basketball team.

And yet, not only did Moses not fear him. He defeated him and his army.

One miracle never mentioned in this context is how a couple of million Israelites all heard one man’s words. Granted, he also wrote them down, but still – no p.a. system. No TV. No internet. Just Moses. Those 120-year-old lungs – gevalt!

Reminding his people of their progress through 40 years in the desert, he also reminds them of the wrong behavior that prolonged that journey. Starting in verse 1, we read references to several geographical spots. “These are the words that Moses spoke to all Israel, beyond the Jordan.” Of course that’s where they were. Then we read “in the desert, in the Aravah (the Dead Sea valley), across from Suph (“yam suph,” the Red Sea) and 5 more places. No, these words were not delivered in all those places. Moses and his people were camped on the east bank of the Jordan. But he spoke about those other places. Each place reminds him of a problem. Loss of faith, active rebellion, idolatry, even the “let’s go back to Egypt” movement. Despite all their mistakes, here they are, ready to cross the Jordan and take possession of the Land. Moses encourages them to follow Joshua on this mission, describing vistas extending as far as the Euphrates River. He praises the chiefs and judges who will help guide the people, and he stresses what policy they must follow: Justice, to each other, to men and to women, to “your brother and to the stranger.”

Reviewing their recent experience, particularly their defeat of Og, the giant king of Bashan, Moses celebrates the victory.

Then he reinforces his message, his words of guidance to the people who will have to fight for their land without him. With justice as your goal, with your faith in G-d to strengthen you, it won’t matter if your enemies hide their weapons behind children like today’s Hamas. It won’t matter if their leader stands 13 feet tall like Og. Moses concludes this week’s section with a ringing charge: Do not fear them, for the L-rd your G-d is fighting for you!

We talk a lot about peace today. Any peace worth having is peace through justice. That means justice both for the Israelite and for the stranger. The alien, the “stranger” in Biblical Israel was expected to follow just the seven Mitzvot of Noah, basic laws of decency – like not eating the flesh of a living animal. He was not required to embrace Judaism, although he could be admitted if he chose to. A Christian stuck in any territory ISIL conquers today faces a dire warning: convert to Islam, flee, or die. That ultimatum, no doubt, applies to a Christian Arab. An American can expect a much narrower choice. And a Jew had better not plan to survive any conquest by ISIL or Hamas.

Terror – whether of physical size, numerical superiority or surprise attack – is in the mind of the object of that terror. The source of terror can be crushed.

Og was Osama. Og was Arafat. Og is Nasrallah. Og is Khamenei. And none of them ever needed a 13-foot bed.

Wartime tests human concepts of justice, in every part of the world. Moses still has plenty to tell us. 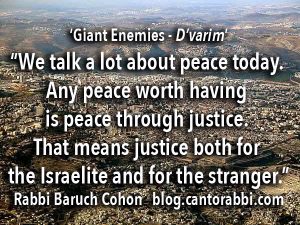