Ancient law, including Torah law, could exact death penalties where none were justified. For example, if A kills B, then A is condemned to death, and B’s next of kin is empowered to find him and kill him. That’s if the court finds there was serious enmity between A and B, and the killing was deliberate. If the killing was accidental – a blade flew off the handle of A’s axe and struck B, for example – and there was no evidence of A’s plan to commit any murder, then A is acquitted. But B’s next of kin is not convinced. What protects A from a revenge killing?

That is one condition we will read about in this week’s Torah portion. Among the many more familiar subjects covered in Moses’ farewell discourses – like a restatement of the Ten Commandments — this one is easy to miss. In fact it is treated elsewhere in the Torah too. Here we learn some unique detail. So let’s see what happens to A, the accidental killer.

Chapter 4, verse 11 tells us that Moses designated 3 cities east of the Jordan as Cities of Refuge. There, one who “murdered his friend unintentionally, who did not hate him yesterday or the day before, can flee to one of those cities, and live.” Back a few weeks, to the reading in Numbers chapter 35, we learn that there were also 3 more such cities west of the Jordan, and we can read details of how all those cities functioned. The dead man’s kin (called go-el ha-dam — the “redeemer of blood”) had to stay out of the city where the killer was, and the killer had to go to trial. We learn practical definitions of motive, of weapons involved, and of the legal procedure. Final sentencing – whether to death or to permanent residence in a City of Refuge – was to be done by the national court. Talmud tractate Sanhedrin further defines who served on that court. No less than 23 judges on any capital case, and the king cannot be one of them. The High Priest could, but his role causes some problems. This Gemara discusses how the law applies to a High Priest who kills, or who gets killed. Convicting the guilty and protecting the innocent are basic goals.

The accidental killer who was sent to the City of Refuge could expect to stay there for an indeterminate length of time. No specific number of years. He had to wait for the death of the Kohen Gadol – the High Priest. After that, Torah law sets him free, and warns the “redeemer of blood” to stay away from him, or face certain execution.

Centuries later, Orey Miklot – Cities of Refuge – appear in, of all places, the Hawaiian Islands. Spend any time in Hawaii and you might get a chance to visit one. It’s a cave, accessible only by water. Once inside, you will see a display that shows how that cave was used. It was a refuge for an accidental killer. If the tribal chiefs tried him and found that he had no plans to murder the victim, he was entitled to live in the cave, fish for food, and stay out of the reach of the vengeful relatives. And how long must this go on? Until the death of the Big Kahuna.

Here I found an exact repetition of millennia-old Torah law – half a world away! How did it happen?

What I learned was fascinating. When the Hawaiian Islands were still uninhabited, some adventurous Polynesians decided they wanted to take them over. They looked for navigators to pilot their boats through the Pacific Ocean, and found that the best qualified pilots were Jewish refugees – probably fleeing European pogroms – who were available and anxious to work. The Pacific was not that different from the Baltic, so they reached Hawaii. Arriving in their new home, these navigators acquired some influence, and incidentally taught their Polynesian passengers some Torah. A professor of linguistics at the University of Hawaii was said to discover a major number of words in the Hawaiian language that have parallel sound and parallel meaning to those words in Hebrew. Like Kahuna = Cohen. Or Makana = Matana (a gift).

Certainly, Cities of Refuge were different from Sanctuary Cities. Yet they shared some goals, like protecting the innocent. Sometimes, they very likely succeeded.

In Honolulu or Jerusalem, let justice be done! 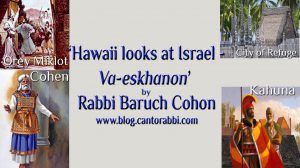