We meet a new man in this week’s Torah reading. Aaron. Unlike other major characters in our Biblical history, his birth was not described. He enters our story as an adult, identified as a good speaker. Also as Moses’ brother. The Torah deals differently with the family of their parents Amram and Yocheved than with any other family. Without mentioning their names, it said in last week’s reading that they were both from the tribe of Levi, they got married and they had a baby boy who was placed in a basket to float in the Nile. And his sister – obviously his older sister, not named here – was stationed on the riverbank to watch him. Of course that baby was Moses, our lawgiver, our teacher, our national and religious leader, the greatest man in Jewish history. Only later do we find out that he was the youngest of three children: Miriam, Aaron and Moses.

His brother Aaron was three years older than Moses, and in this week’s reading Aaron becomes his brother’s spokesman, presenting the Divine message of freedom, first to their enslaved people – who are too impatient and worn out to listen to it – and then to the Pharaoh, who doesn’t want to hear it at all. Since Pharaoh is surrounded with khartumim – sorcerers – Aaron has to compete with them, not only in enunciating a spoken message, but in performing magic with his brother’s staff.

All this action starts because Moses stutters. His speech defect makes him dependent on his wellspoken and skillful brother. And we note that Moses receives direct messages from G-d at least three times before G-d speaks to both him and Aaron.

Following Aaron through this week’s section, and observing his action later in the Torah narrative, we find a fascinating personality. He never challenges his kid brother’s leadership, but he is no patsy either. Both he and Miriam severely criticize Moses for claiming sole authority. Miriam’s rebellion is punished with an attack of leprosy and she gets quarantined, and it is Aaron who intercedes with Moses to pray for her cure and release. Aaron himself can confess his mistake. His goal is peace and unity within his family and his people.

As a family chief in the tribe of Levi, he is charged with religious duties in the Tabernacle, and so will place his wooden staff in that portable sanctuary overnight along with those of the other chiefs. In the morning, just one staff blooms and even bears fruit – Aaron’s. So he will become the High Priest. No longer Aharon haLevi, he will then become Aharon haKohen – the designation passed along to all his descendants. In our generation, the discovery of DNA enabled medical scientists to identify kohanim in many parts of the world, some of whom were not aware they were even Jewish. As one of his distant descendants, I can thank Aaron for the privilege of being called first to bless the Torah in today’s synagogue. Most indicative of Aaron’s blessing is the Midrashic quote of the Divine message that says:

Moses, tell your brother Aaron: Greater than the gifts of the princes is your gift, for you will kindle the light. While the sacrifices will last only as long as the Temple lasts, your light of Torah will last forever.

Throughout their lives, Moses and Aaron presented a contrast. One preached, the other consoled. The spokesman/magician became the peacemaker.

Priestly privilege frequently becomes an avenue to political power. More than one ruler was known to consult his court priest before going to war or sentencing dissidents. Not with Aaron. He was no Rasputin. If anything, he was the opposite. Thereby he set an example. In the Mishna, the famous Hillel gave this advice:

Be among the disciples of Aaron, loving peace, pursuing peace, loving your fellow creatures and drawing them near to the Torah. (Avot 1:12)

Of course our Torah tells it like it was. Aaron was not perfect; he made mistakes. He saw his people restless and angry while waiting for Moses to come down from Mount Sinai. They were ready to give up and go back to Egypt. So he distracted them with the Golden Calf. Maybe it was a sin, certainly it was the kind of idolatry that Moses preached against. But it kept them together, eventually to follow Moses – and Aaron – to the Promised Land. Extenuating circumstances notwithstanding!

A glance at today’s map of Africa can stimulate an interesting question. The capital of Sudan – once part of the Egyptian empire – is a city called Khartoum. Could it be named after one of Pharaoh’s sorcerers? This week we will read how Aaron outdid those slight-of-handers. But their name is still around!

Yes, the man we meet this week is worth knowing. A very human, very devoted kindler of light and lover of his fellow creatures. We could do well to follow in his footsteps. 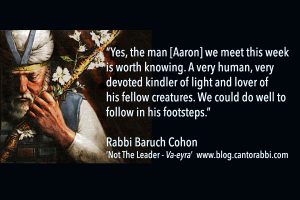