Reading our Torah every week has to impress us with the difference it shows in different languages. Even the names of the Biblical books are different. With the exception of the first book, Genesis whose Hebrew name B’reyshis echoes that meaning, the books of the Torah seem to change their significance in translation. The name of the third book, Vayikra, has nothing to do with the priestly duties and sacrificial ceremonies of “Leviticus”. It simply means “He called.” Bamidbor doesn’t mean “Numbers.” It means “In the desert.” And “Deuteronomy,” if it means anything at all to us, it means “later” – something that comes after something else. And although it can occasionally refer to D’varim, “words,” its Hebrew name describing what Moses said, the English and/or Latin name makes it sound like an appendix.

Of all the names of all the books, none is further from a translation than the book we start reading this week, “Exodus.” Its English name heralds the epic of our people’s emancipation, their thrill of achieving national identity at Sinai, and their struggles against danger within and without. The name reminds us of what we had to do and how nearly we often failed to do it. But the Hebrew name Sh’mos just means “names.” Indeed our reading opens with a plain narration reminding us that “These are the names of the children of Israel who came to Egypt.”

If we were listening at all for the last few weeks, we already know those names: Jacob and 11 of his 12 sons, the remaining one being Joseph who was already in Egypt; also their wives and children. No news there. But let’s look ahead. By verse 6 of chapter 1, we already learn that Joseph and his brothers and all that generation died. Their descendants distinguished themselves by a high birthrate. In fact, as we will read, they “increased and multiplied and swarmed and grew very powerful, and the land was full of them.” And what else happened? Some of them changed their names.

Did it happen in Egypt? Did Reuven sometimes become Raamses? Well, one Midrash recounts that some of the Israelites in Egypt adopted the motto: “Let us be Egyptian in all things.”

What’s this? Assimilation? Even before the Exodus! Moses faced a greater challenge than slavery, didn’t he? He had to lead people who would rather not be led, to find a country they mostly ceased longing for, to pledge allegiance to a G-d they did not know. Many of these people certainly wanted their freedom, but if given a choice would rather stay in Egypt than face the Red Sea. Yet somehow with Moses urging them on, they survived, left Egypt and became an independent nation. They even produced a legacy that grew and developed over all the succeeding centuries. They took that unique legacy with them to many parts of the world – to Asia, Europe, Africa, America. And their names went with them.

For them and for all of us, we might or might not change our names, but our prayers remind us that we are the people of Abraham, Isaac and Jacob – not as one wit paraphrased it: Alvin, Irving and Jerome.

As reported by Jonathan Ornstein, a past winner of the Cohon Award for his work rebuilding the Krakow Jewish community, some sad survivors among Polish Jewry tried to hide from Communist oppression by changing their names. So Schwartzberg became Kowalski. Now they search for a way home. They – and all of us – get reminded at uncomfortable times that Exodus is about freeing ourselves from servitude to our enemies. Not about leaving our identity. Not about escaping from our names.

One true theme of the Second Book of the Torah teaches us that, like our ancestors who “came to Egypt,” wherever you go, you are still Jacob. You are still Rachel and Leah. You are still Reuven and Shimon and Levi. You are still Miriam and Aaron and Moshe. Let’s honor our Jewish names. Wear them with pride. 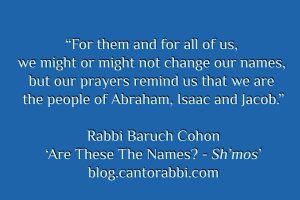