Quotations can be fascinating. We get hung up on them. They become clichés. They get twisted into jokes, song lyrics, book titles, slogans. And we never stop distorting them. Remember the old poem, “Blessings on thee, little man/ Barefoot boy with cheek of tan”? And then how it became the title of a hilarious and highly successful book by Max Shulman called “Barefoot Boy with Cheek?”

Or take Biblical quotations: “Voice of the Turtle,” “Darkness at Noon,” “Awake and Sing.” As play titles, they have little to do with their origin.

The famous story of the heathen challenging Hillel to teach him the whole Torah while he stands on one foot frequently gets truncated in quotation. As you may remember, when the heathen took his challenge to Shammai he got thrown out. So Hillel found a way to deal with him. While the heathen stood on one foot Hillel said “What is hateful to you, don’t do to your neighbor. That is the Torah. The rest is commentary.” Ah, but that’s not all he said. His last two words get lost too often. What were they? Zil g’mor – “Go and study!”

Case in point: this week’s Sedrah, Bo. Moses and Aaron bring Pharaoh their message, which all the world remembers as “Let my people go!” They compete with the Egyptian sorcerers in working wonders and inducing plagues, but they fail to convince the king. He seems to think they are playing a game with him, so he plays too. Like Arafat or Saddam or Khamenei – not to mention other well-known Middle Eastern negotiators – he agrees to whatever they ask for, until the plague stops. Then he breaks his word. After all, his magicians can do the same tricks.

Perhaps he misses the point. Perhaps we do too. Pharaoh fails to listen to the whole sentence. All he hears – all the world remembers – is Let My People Go. He doesn’t listen to the end of the sentence, where Moses says v’yaav-duni – “to serve G-d.” There is a purpose for freedom. Beyond removing chains. Beyond the end of whips and slave markets and Jim Crow. The purpose is to achieve a Divinely given identity. To serve the Divine image within us. To fulfill our destiny as human beings and as a nation.

Freedom is in the soul of the free. Once I remember writing, and later recording, a song on this text:

Sing it at your Seder. That song, and this Sedrah, recall a little scene many years ago at the Hollywood Palladium. Most of the people at the dance were middle-aged, but there was one young couple who seemed particularly interested in what the Jewish combo was playing. At the evening’s end, only the leader and the guitar player were still there wrapping up their gear – only they, and the young couple, still hanging around. Approaching the leader, the girl said: “You don’t know what you did to me tonight.”

Being a little surprised, he asked what it was that he did.

“Well,” she explained, “I’ve been through Zen and Yoga and all kinds of meditation…but tonight, listening to you and your music – it just made me glad to be Jewish.”

Wow! He thought, if he can give that feeling to her or any more like her, he did not live in vain. His music had helped liberate her to be herself! Now she needed to follow it through and learn. I hope she did.

The key is — finish the sentence. Follow the purpose.

Getting out of Egypt did not make Jews a nation. We just stopped being slaves. We were free but still did not know our purpose or our identity. What made us a nation? Sinai. Receiving the Torah, our constitution. Roadmap for serving the One G-d. That was why Moses was sent to defy Pharaoh. That was why the Red Sea had to be crossed.

Torah can elevate our lives above the secular society that surrounds us. If we use that opportunity, we can free ourselves from the slavery of Madison Avenue just as cleanly as our ancestors crossed the Red Sea.

Not all those who left Egypt made it to Mount Sinai. But no Jew reached Sinai without leaving Egypt. That’s not just geography. That’s the whole lesson of Bo. Letting our spirits go, that’s the necessary first step. Breaking out of the pattern that may be enslaving us now. And if we can do that, keeping in mind the purpose of freedom, we have a chance to reach both our personal Sinai and our public Sinai. To learn Torah and implement it in our lives. To fulfill ourselves as people – and as a People. Our future could depend on it. 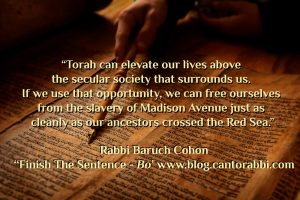