This week we begin reading Exodus, the second book of the Torah – or as we call our Torah, the Five Books of Moses.  Why do we call them all his books, even though Moses doesn’t even get born until Chapter 2 of this second book?

Traditionally, of course, Moses is credited with writing the entire Torah, all 5 books.  How could he do that?  Did he know Adam and Eve?  Or Abraham and Sarah?  Who told him about Esau’s plan to kill Jacob?  Where was he when Joseph’s brothers sold him into Egypt?

All those people definitely predated Moses by many years, some by centuries.  But Moses heard, and learned, and wrote.  The baby boy, whose sister Miriam watches over him this week as he floats in the Nile, will grow into a leader who will champion his people, will develop a unique contact with the Divine, and will set a pattern and blaze a career that no other human being could ever equal.

We will read the beginnings of that career this week. Fished out of the water by Pharaoh’s daughter, little Moses grows, or as the Hebrew text phrases it Vayigdal – “he became big.”  The same word for “big” also means “great.”  Although his childhood is spent in the royal palace, he knows his origin and he chooses to assert it.  As a young man, venturing into the field where bricks are being made, he finds a taskmaster flogging a Hebrew slave, and he kills the taskmaster.  That sudden violence turns Pharaoh against him and he has to run for his life.  But his passionate devotion to his G-d and his people never falters.

Was he afraid of the taskmaster?  Obviously not, any more than he  would fear King Sihon of the Amorites, or Og the giant king of Bashan, in the years to come.  The only man Moses feared in his youth was Pharaoh.  Knowing what Pharaoh would do to him in punishment for killing the taskmaster, Moses leaves the country.

He will return, as we will also read in this Sedrah, but only after he meets the Almighty.  His revelation at the burning bush, his personal conversations, even arguments, with G-d, all prepare him to fill the role that only Moses ever filled throughout Jewish history.

In the coming chapters we will watch Moses develop the attributes of vision, inspiration, courage and leadership that he combined to bring his people – our ancestors – to their freedom in the desert, to their national identity at Mount Sinai, and to their view of their homeland at the Jordan River. There is the future of the 3-month-old boy we meet this week.

So are all 5 Torah books the “Books of Moses?”  Traditionally, the first 4 were dictated to him from Above, and the last one, Deuteronomy, is Moses’ own words, transcribed from his speech to his people, as indicated by the Hebrew name of that book D’varim – “Words,” his words, delivered on the east bank of the Jordan.

Other nations have heroic leaders whose memories they treasure.  We are fortunate indeed to look up to the man who led us out of slavery, encouraged us to victory over primitive enemies, and taught us Eternal Truth – symbolized in the Five Books of Moses. 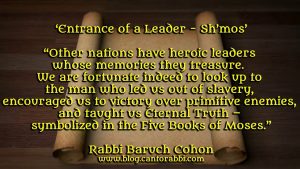