As we conclude the Book of Leviticus this week with a double reading covering its last three chapters, we might well consider this a particularly appropriate year to read this text. This spring, we will acknowledge the 50th anniversary of the Six Day War. That memorable Israeli victory reunited Jerusalem and reconquered historic territory. What happened since then effectively ruined much of that accomplishment. And this week’s Torah readings explain modern history rather dramatically.

The first of these readings is called Behar – “On the mountain” – referring of course to Mount Sinai where our ancestors accepted the Divine commandments that became our Constitution. As you know, the entire Sinai peninsula was captured in 1967, and later given back to Egypt. But the commandments still belong to us. Included in those commandments are rules for tending and preserving the land the Israelites were heading for. Also principles for how to treat each other. We will read about the sabbatical year, when farms should be left unplowed to rest the earth. And we will also read about responsibility to help “your brother who is waxen poor.” If you lend him money, take no interest. Help him live. Whether he is a native Jew, or a convert, or as Ibn Ezra includes a resident alien – don’t let him starve. And we notice that the Torah directs this rule to the individual, not the state. This is not a “stimulus package.” It is an Israelite’s duty to save a neighbor. We are one people.

The second reading, Behukosai – “In My statutes” – details the results to be expected from following Torah principles. And from violating them. Make those principles our guide, we will read, and we can relish the joys of peace and prosperity. We will even read about further victories, that if we must go to war “five of you will chase a hundred enemies, and a hundred of you will chase a thousand. Your enemies will fall before you.” Speaking in G-d’s name, the Torah predicts: “I will walk among you, and you will be my people.”

But then we will also read about the reverse effects. Forget about our mutual concern, despise the Mitzvos, exploit the land and each other? Then “I will let your cities be ruined, and your holy places destroyed…” This full list of curses, called the tokhakha, goes on and on – and is a mere preview of the list in Deuteronomy. Both lists hardly anticipate our history.

Considered from the vantage point of the last half century, we can draw a distinct parallel.

The Six Day War brought a miracle to Israel and to World Jewry. We thought that the miracle was military victory. What it really was, was the spirit of national unity that made victory possible. Secular kibbutzniks and religious yeshiva students joined forces to defeat their smug enemies. But they all served under assorted leadership. During the battle for Jerusalem, General Motta Gur radioed headquarters with a historic 3-word message: Har ha-ba-yit b’ya-deynu – “The Temple Mount is in our hands!” And a single soldier climbed the Dome of the Rock and attached an Israeli flag, signaling Jewish return to the holy hilltop after 19 centuries. But no less a hero than Moshe Dayan ordered it taken down. By the following week, national unity began to dissolve.

Over the succeeding decades, we see appeasement groups within our communities both in Israel and worldwide, Jewish pressure on the left. And we see opposing efforts on the right, supporting Israeli power. Neither national unity nor Torah principles can prevail. From the Middle East to the committees of the UN, enemies threaten the Jewish future. Do we have something to learn? Definitely.

This week’s double reading completes this year’s review of Leviticus – the book of priestly statutes. Next comes the Book of Numbers, in Hebrew called Bamidbor – “In the desert.” In many ways, that’s where we are. We need to find our way out of this religious and historic desert where we find ourselves. This week’s double Sedrah offers us one strong guide: Help our fellow Jews, remembering that we are one people. 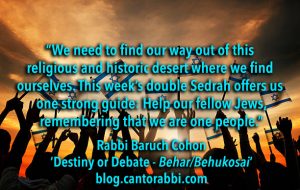 Group of People Waving the Flag of Israel