Along with the details of the military census, the duties of the tribe of Levi, and the protective coverings for transporting the Tabernacle and its furnishings, this week’s Torah reading gives us the layout of the Israelite camp in the desert. Facing decades in that harsh location, we begin this phase of our history with the Sedrah – and the entire book – named for it: Bamidbar, “In the desert.”

One significant part of that process is reflected in the layout of the camp. Central in every camp was placed the Tabernacle. Members of the tribe of Levi – not counted in the military census – maintained the portable sanctuary, so they had to pitch their tents closest to it on all four sides. One Levitic family is assigned to each side. Merari on the north, Kehos on the south, Gershon on the west, and on the east the families of Moses and Aaron – adjoining the Tabernacle’s entrance. We note the importance of the eastward direction. Keydma mizrakha — “forward, eastward” – says the Torah. Both for Aaron and his sons as kohanim and for his brother Moses as head of state, this location positions them to lead, whether to break camp and move on, or to find a stopping place however temporary.

Another camping assignment illustrates military and political leadership then and later. Of the 12 tribes, 3 are assigned to camp side by side, on each side of the Tabernacle, just outside of the Levitic camps. Each tribe counts its military members, and those numbers are mentioned here. On the north we have the tribes of Dan, Asher and Naftali. Their total number of fighting men: 157,600. On the south are Reuven, Shimon and Gad, with a total of 151,450. On the west are Ephraim, Menashe and Benjamin, whose total is 108,100. And on the east, parallel to the Tabernacle entrance, the tribes of Judah, Issachar and Zebulon, with a total of 186,400 soldiers. Of course these totals add up to 603,550, the number of fighting men Moses already recorded twice – once when they left Egypt, and the second time at the beginning of this Sedrah.

As an interesting sidelight on these numbers, we might notice that the largest number of potential soldiers is camped on the east – prepared to support the national and religious leadership of the people as they head the march through the desert.

Of the tribes assigned to each side, the Torah does not specify what order they should camp in. Commentators differ about that. The Lubavitcher Rebbe, for example, assigns the central positions to Asher on the north, Shimon south, Menashe west and Issachar east, while the Hertz Commentary assigns them to Dan, Reuven, Ephraim and Judah. Very likely, Rabbi Hertz had historical reasons for selecting Judah’s descendants to occupy the position closest to the Tabernacle entrance, as a reward for the past leadership that Judah himself showed, and the fact that Israel’s kings – the House of David — would some day emerge from Judah’s tribe.

Considered today, we have to realize that our Tabernacle is still portable. All of us, from whatever family or tribe, can be grateful for the devoted ancestors that moved our people and our heritage forward. Their route covered much more of the planet than the desert of Moses’ time. For many modern Israelites it led to the same destination.

For the rest of us, let us pursue our trek into the Jewish future with the same determination that Moses and his tribal leaders had. 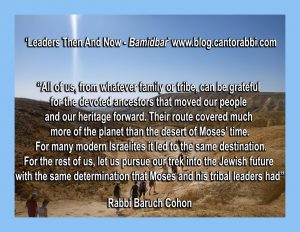