This week we will read the last two sections in the fourth book of the Torah, Sefer Bamidbor, otherwise known as Numbers. Forty trying years now bring our ancestors to the banks of the Jordan, gateway to the Promised Land.   As we might expect, these two sections contain a variety of themes.  Review of laws, historic accounts of travel through empty land and then fighting enemies who refused to let them pass — all increase the leaders’ load – plus several internal conflicts with those who wanted to take the leaders’ places.   Of all the rulings Moses made in these last years of his life, a unique one takes place in Chapter 35.

Here we learn about A-rey miklat –Cities of Refuge, to be established, six in all – three east of the Jordan where two and a half tribes chose to live, and the other three west of the Jordan, in the Land of Israel proper.  These cities offer a safe haven to someone who has killed by accident.  No enmity existed between killer and victim. Therefore, the next of kin, called the “blood redeemer – go’el hadom”must be prevented from taking revenge as was expected otherwise.  The accidental killer is to find refuge in this place and remain safe there until the death of the High Priest – the Kohen gadol – after which the “blood redeemer” loses his opportunity for vengeance.

Some commentators question the number of these cities.  Why should just two and a half tribes have as many refuge cities east of the Jordan as nine and a half tribes would have in the west?  Good question.  Maybe those two and a half tended to be more careless about whose life they risked? The Torah offers no explanation. But since the religious and administrative centers were all on the west side, we might imagine that life was more civilized there.  Moses foresaw these conditions, of course.

Another question: what constitutes killing by accident?   In Deuteronomy’s section called Shoftim (Judges), this ruling is treated again, and a classic example appears:   two men are chopping trees in the forest, and as one of them swings his axe the iron head flies off and the blade hits his friend’s neck, killing him!   The man with the axe has every right to go to the City of Refuge.   Immediately, the Torah goes on to stress that if, on the other hand, the killing was a deliberate murder and that is proven, then the people have the duty to remove the killer and put him to death.  Uviarta ha-ra mi-kirbecha –“Remove evil from your midst!”  Compare this act of justice with a recent case in California where a convicted “hatchet murderer” lived some 35 years in prison before being condemned to death this year.   Was that cell his city of refuge?

The whole plan of the City of Refuge rings particularly in my memory, ever since my first trip to Hawaii.   One sightseeing boat trip brought us to a cave, accessible only by water, where an inadvertent killer could escape the revenge of the victim’s next of kin.  Pictures in the cave’s artistic displays confirmed that under old Hawaiian law a qualified resident of this refuge was entitled to protection until the death of the Big Kahuna.  In the Hawaiian language, of course, a kahuna is a priest – very close to the Hebrew word kohen.  So the Big Kahuna would be the Kohen gadol.  And the other elements of the practice exactly parallel Torah law. Here in mid-Pacific was an outpost of Judaism!  Amazed by the similarity, I contacted a friend who at that time was the only rabbi on the island, and discussed the question with him.  Where did the Hawaiians learn Torah?   His answer never left me:  When tribesmen from primitive Polynesia decided to move to then-uninhabited Hawaii, they needed pilots, navigators to help them across all those miles of Pacific waters.  The best pilots available were Jews, refugees from European persecution who were living on the Chinese coast and looking for work.  They were hired.  As they guided the settlers to their new home, they also taught them some language—about 200 words in Hawaiian that have similar sound and meaning to those words in Hebrew.   And they taught them some ideas too.  Like Torah principles.  Like Cities of Refuge.  True, the Hawaiians later changed the particulars somewhat over the centuries, but the Kahuna still rules.

To the credit of the U.S. Department of the Interior, one of these cities is preserved and is planned to be restored to its historic identity.  It is called the Pu’uhonua of Honaunau.  There Hawaii will honor the tradition of protecting the innocent and removing evil.

This Shabat morning when we honor the completion of the book of Numbers, we will chant Khazak khazak v’niskhazek – “Be strong, be strong, and let us strengthen each other!”  By all means.  Just like we strengthened those Hawaiian pioneers. 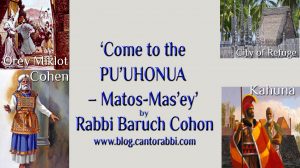