This week we begin reading Sefer D’varim, (literally “the book of words”), Deuteronomy, the fifth and last book of the Torah.  The 120-year old leader Moses gives his people a farewell message in three magnificent monologues.  How did a man that age make himself heard to an audience of some 2 million?   No use guessing.  Given some of the other miraculous events in his career, let’s just assume that those who listened, heard.

What they heard was hardly likely to please them. Moses reminds them of all the places where they did wrong, where they rebelled and rejected Divine guidance, where they brought disaster on themselves.  And he relays G-d’s message: “Not one man of the generation that left Egypt will see the good land that I promised to your ancestors.”  The exceptions are just two: Caleb, one of the only 2 spies who brought a good report, expressing faith and confidence that Canaan could be conquered; and Joshua, the other favorable spy, who will lead the conquest.

As we will re-read Moses’ stirring messages over the coming weeks, we will find a variety of examples of how the Exodus generation failed.  All of those failures stem from one sad source.  They lost faith.  Sometimes they lost it so completely that they were really considering going back to Egypt.  They remembered eating meat there, and the desert diet contained G-d-given manna, but precious little meat.  So they would be slaves again.  So what? Was that any worse than fighting off desert tribes, only to stand hungry at Mount Sinai and accept hundreds of new obligations?

Yet those rebels, those losers of faith, could not forget the dream – the Great Promise – a land of their own.  Freedom and home and future.  Now their leader tells them that not only will he himself not live to cross the Jordan, but neither will they.  Only their heirs, their children and grandchildren, will follow Joshua to build the nation’s freedom and home and future.  Freedom from Pharaoh; home to the land vouchsafed to Abraham and Isaac and Jacob; and a future full of hope for prosperity and power, population and prophecy.

After 40 years in transit, the second generation knew the hardships of the desert, the dangers from hostile tribes, the thirst and the hunger and the squabbling that they and their parents went through.  What a blessed relief it would be to leave that behind and find a fertile homeland – the place they heard about all their lives – their ancestral country.  If taking it over meant war, they were ready.

Or were they?  Maybe their parents lost faith, but what about them?  Were they innocent of the slavish doubts and rebellious urges that turned some of their parents against Moses and his message?   How could they qualify to inherit the Land of Israel, being the sons and daughters of the Exodus generation?

Pharaoh, faced with a slave rebellion, planned genocide.  And he lost his battle by a miraculous Red Sea defeat. Not one death camp remains in Egpyt. Ever since the Red Sea crossing, we have been reading about the  trials and the progress of the Exodus generation.   They received the Torah, they survived armed attack and sexual epidemic, and some of them lost faith.  Their distant descendants, some of them victims of a genocide much more successful than Pharaoh’s, also included some who lost faith.  None of the remaining death camps of Europe show any different treatment for the faithless.  But they also included many who regained it, and once freed, gathered together with believers – both political and religious – to cross the Jordan and the Mediterranean and, yes, the Red Sea too – to return to the Land of Israel.  Did some of them lose faith?  They did. But this time they were not excluded.

The children of the Exodus generation went on and produced a King Solomon who built the Temple.  This week we mourn for that Temple and the Second Temple as well, both destroyed by enemies on the same day, tish’a b’av, the ninth day in the month of Av which actually falls on this Shabos when we read this section.   Therefore we will observe the fast of mourning on Sunday.

Our scholars tell us that the Third Temple will be built only when the Moshiach arrives.  It will shine Divine light to all Jews, and hopefully to the whole world.

Let’s hope that whenever that happens, our people will not lose faith, but will inherit a blessed future. 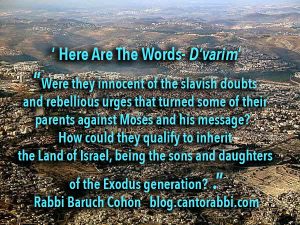