A Moabite king named Balak fears a possible invasion by the Israelite forces who are camped nearby. They just fought and defeated the forces of Emor and Bashan, so he feels he needs some supernatural help. He sends a message to a sorcerer, Balaam son of Beor, and asks him to curse Israel. “Perhaps [then] I will be able to strike them and drive them out of the land.”

Apparently Balak was not aware of the fact that Balaam believes in G-d, so he and his curses – and his blessings – are subject to Divine rule. So after spending the night at Balaam’s house, the royal messengers get a polite refusal. During that night, Balaam got the orders from on High: Don’t go with them, don’t curse Israel, because Israel is blessed.

Of course, Balak is not ready to give up. He sends his messengers back again, this time with a promise of royal gifts to Balaam in exchange for the curse. Again, they sleep over. Again, Balaam gets the Divine orders: all right, go with them, but you will speak only the words I put in your mouth.

Now comes the famous talking donkey sequence. En route to the mountain from where he will see the Israelite camp, Balaam is faced with a Divine messenger who threatens his life – not once, but 3 times. He cannot see the threat, but his donkey can, and saves him first by going off the road into the field, a second time by squashing his leg against a fence, and the last time – lacking any way around the threat – by squatting under Balaam. Each time, Balaam strikes the donkey. Finally she opens her mouth and challenges him:

“What did I do to you, that you hit me now three times?”

Apparently not surprised to hear the donkey speaking, Balaam rages:

“You embarrassed me. If I had a sword in my hand I would kill you.”

“Am I not your donkey that you rode all your life? Did I ever do this to you before?”

“No.” And suddenly, Balaam’s eyes are opened and he sees the armed angel in front of him. He jumps down and bows to the ground in front of the angel. Now the angel speaks:

“Why did you beat your donkey, now three times? Look, I came out to prevent you from continuing a wrong journey. The donkey saw me and turned away. Otherwise, I would have killed you and kept the donkey alive.”

Now wait a minute. Why was this a wrong journey? Didn’t G-d tell Balaam to go with Balak’s men – even if he would be able to speak only G-d’s words?

Balaam’s motivation is suspect. Did he go because of the wealth Balak promised him this time? Or was there another reason?

Our commentators point to a line in one of Balaam’s prophecies to answer that question. Balak asked for a curse with the Hebrew word arah. Balaam used the word kaboh – condemn. It appears even in the blessing he pronounces as he views the Israelite camp:

From the mountains of the East, Balak brought me, saying “Come curse Jacob for me… How can I curse one whom G-d has not cursed? How can I condemn one whom the Eternal has not condemned?… Who has counted the dust of Jacob, or numbered the multitude of Israel? Let me die the death of the righteous, and let my end be like his!

Rashi says this indicates that Balaam hated Israel more than Balak did. Balak just wanted the Israelites out of his country. Balaam wanted them out of the world. Not just extradition. Extermination.

The Klee Yokor commentary takes an opposite view of those two words. But the riddle remains: who hates Israel more?

Among our enemies ever since Balak and Balaam, there would seem to be an ongoing rivalry. Who hated Israel more, Chmelnitzky or Hitler? Who hates us more now, Khamenei or Abbas? Barack Obama or David Duke? Or maybe the trophy should go to the Jewish traitor, Soros?

If nothing else, the commentators’ contest for hatred highlights the effect of Balaam’s extravagant blessings. Did he really mean a word of it? 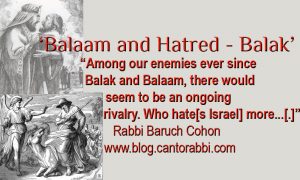