It is told of the sage called the Chofetz Chaim (“Desirer of Life”) that he once had to go to a Czarist official and plead for relief from a particularly harsh decree against the Jewish people.  Since the Chofetz Chaim spoke no Russian and the aristocratic official spoke no Yiddish, an interpreter stood waiting.  Once permitted to speak, the Chofetz Chaim delivered his message with all the feeling and sincerity that emanated from a heart as pure as his.  When he finished, a pregnant silence filled the room.  Then the interpreter started to speak: “Your honor, the Jew claims…”   Whereupon the Russian official raised his hand and said: “No translation will be necessary.  I understood.”  As a result of this meeting, the decree was revoked.

Words from the heart, we are taught, enter the heart.  A classic example of such an effort colors this week’s Torah reading.   Joseph’s brothers stand before him, still unaware of who he is, while he knows them very well.  This is the second of three trips these men make from Canaan to Egypt.  One of the brothers, Simeon, was in custody as Joseph’s prisoner taken to make sure they came back.  Now he is free.  But Joseph could not resist using his power and his anonymity to them and played a cat–and-mouse game, ordering his servants to place his goblet in Benjamin’s bag and create an excuse to hold onto his little brother – the only full brother he has.  Last week’s reading ended with Joseph demanding that they leave Benjamin in his custody and they go back to their father.

Now we witness the development of Judah’s character, as he steps forward to plead with the man whom he knows only as the Viceroy of Egypt who of course speaks no Hebrew.   Emerging as family leader – even though he is not the firstborn – Judah describes his father’s dismay at losing the first son of his beloved Rachel, and now the dread of losing her other son.  “His soul is bound up with the lad’s soul,” says Judah.  He offers to stay in Benjamin’s place, and voices the awful thought that the old man will die when he sees his other sons return without Benjamin.

No interpreter gets a chance to speak.  Joseph cannot control himself.   He sends out the interpreters, the courtiers, all the attendants who surround him, and he faces his brothers in tears.  In fact he cries loud enough that he is heard throughout Pharaoh’s house.  But his message is for his brothers alone.  His Hebrew is heartfelt: “A-nee Yosef — I am Joseph.  Is my father still alive?”  Predictably, we learn that the brothers are nonplussed.  They cannot even answer him, even though now they are all speaking the same language.  So he asks them to come close to him, as he makes his true identity known to them.

Why come close?  Commentators give interesting answers.  The Klee Yokor says he had to show them he was circumcised, as proof positive that he was one of them.  Speaking Hebrew was not enough.  After all, the Egyptian interpreter also spoke Hebrew.

The Or haHayyim says he needed them close enough to whisper to them, aware that his Egyptian advisors would be listening through the keyholes.  Certainly Joseph has plenty to tell his brothers, about how he is dealing with the famine, about the Land of Goshen where he plans to settle them, maybe even why he had to shave off his beard.  What he says here, however, concerns them directly: “Don’t think it was you who sent me here.  G-d sent me to prepare a refuge for our family.”

Those words come from the heart.  How many discounted or ignored younger brothers in recent centuries crossed half a world to prepare a refuge for their families!  Courage like Joseph’s builds Jewish history. 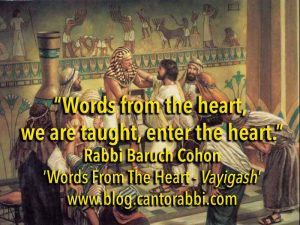