Oh bury me not on the lone prairie,

These words come low and mournfully

From the pallid lips of a youth who lay

On his dyin’ bed at the close of day….

By my father’s grave oh let me be

And bury me not on the lone prairie.

That sad young cowboy had good company.  None other than the patriarch Jacob.  In this week’s Torah reading, he calls in his favorite son Joseph and makes him swear not to bury his father in Egypt.  His last request is to be buried in the Cave of Machpelah where his parents and his wife Leah lie.  Like so many other mortals facing the end of life, he wants to go home.

Our commentators cite a few other reasons not to bury Jacob in Egypt, not even in a pyramid.  After his years in Egypt, Jacob evidently became well respected, and might rate a distinguished tomb.  But he does not want one, not there.   Rashi and the Klee Yokor detail three factors behind this oath that Jacob requires of Joseph.  One concerns lice, which inhabit Egyptian soil and would attack the body.  Worms are bad enough, but lice??  (Actually tradition states that there were seven people whose bodies the worms could not devour, and Jacob was one of them.  No word about lice.)  A second one concerns the Egyptian custom of gathering at the tomb of an honored man and conducting pagan worship.  Jacob’s grave should not prompt idolatry.  And the third consideration is the tradition that when the Messiah comes, those buried outside the Land of Israel will have to roll underground all the way there to be revived.  All things considered, Jacob says “take me out of Egypt, let me lie with my fathers, and bury me in their burying-place.”

Jacob then proceeds to give his last message to his sons.  Not really a blessing, this message is more of a judgment on their characters, based on their behavior.  Some show promise, some are plodders, others get specific charges from their father.  Reuben loses the privilege of the firstborn because he once bedded his father’s wife.  Judah, by contrast, proved himself a leader and gets acknowledged as such.  No mention of his little intrigue with Tamar.  The commentators link this praise of Judah to the future, for he will be the ancestor of King David.  But of course it is Joseph who gets Jacob’s greatest love and favor.  And Joseph’s two sons got blessed as equal to Reuben and Simeon, effectively giving Joseph the double portion of the firstborn which Reuben is denied.   As Jacob completes his message, he puts his legs back in bed and breathes his last.  It is Joseph who weeps over him, kisses him, and then orders his body embalmed.

Commentators point out that the embalming process will take 40 days, to prepare for the journey to Hebron.  Joseph leads that trek.  And the rest of Jacob’s family goes with him – the entire people.  When they stop in Atad, east of the Jordan en route to Machpelah, they observe seven days of deep mourning, the same week of shiv’a that Jewish families still sit, although now we do so after the burial.  When Jacob’s family does it, the local population sees them and concludes that this must be a very sad day for Egypt.  Actually we read here that Egypt mourned Jacob for 70 days.   Almost the same importance as the Pharaohs, since royalty received just 72 days.  Flags at half-staff.

And maybe something more.

Jacob the foreigner earned Egypt’s respect.  Now he has every right to go home. 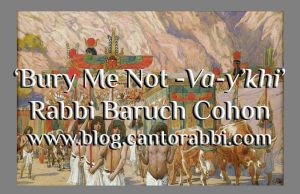