Jacob leaves home, ostensibly on his way to Haran to find a wife, but more importantly to get out of harm’s way in the person of his vengeful brother Esau.  He stops for the night in a place that is strange to him, and goes to sleep on a rock.  That place, that rock, that night become a life-changing experience for him. Because that is where he has his famous dream: a ladder reaching into heaven, with angels climbing both up it and down it.

Interesting that the story has the angels going up first and then coming down.  If angels are heavenly creatures, how did they get to the bottom of the ladder to climb up?  Didn’t they have to come down first?

Rashi explains that these angels were already with Jacob. They were the angels of the Land of Israel, and they could go no farther with him, because he chose to stop for the night just at the boundary line.  So these Israeli Guard angels were changing places with a second group of angels who would accompany him outside the Land.  Of course, Jacob was totally unaware of this whole Changing of the Guard – until his dream.

Waking from that dream, he has a striking reaction. Actually two reactions.  The first – awe.  “Certainly G-d is in this place and I did not know it.”  Then on further thought, he begins to digest the message he got in the dream – the message of Divine guidance on his journey and back home again.  And he offers a return commitment.  A contract, if you will.  “If G–d will be with me on the way that I go, and see that I have food to eat and clothes to wear, and if I can come home safely to my father’s house, then You [haShem] will be my G-d, and whatever You give me, I will return you a tenth.”

In other words, if this dream was a real flash of prophecy, and it comes true, I will believe.   And if I can go home safely, I’ll even make a contribution.  That is the awe-inspired reaction: gratitude calls for a contract.

Or:  Wow! What a dream!  I was talking to G-d!  It must be Divine inspiration.  That is the shock reaction: I was religious all the time and didn’t realize it!

Each of us in our attitude toward our faith takes one of these attitudes – awe, or shock.  At different times we may take both.

Something wonderful happens to us – the thrill of love, or winning the lottery, or getting safely discharged from the Armed Forces, or the birth of our first child, or maybe just climbing to the top of a major mountain and being alone with the universe.  And we suddenly discover the Master of that Universe.  We suddenly realize that we were really religious all the time and didn’t know it.  If that’s your experience, congratulations.  You can savor the wonder of life – the Wow!

Or… the daily grind becomes more complex.  More grinding.  And we wish for some childhood simplicity.  Let me go home safely and I’ll be glad to pray.  I’ll even make a contribution.  But don’t bother me now.  Not unless you can prove this idea is really prophetic and will come true.

Both of these reactions are legitimate, and neither is the whole story.  Which one applies to you?  Or are you an atheist?

Let me tell you about atheists.

Crossing the Gulf of Alaska in a 136-foot wooden minesweeper in the last year of World War II, we went through a typhoon.  Time after time, our little ship climbed trembling to the crest of 60-foot swells, shivered there for a long moment – both screws out of the water, completely at the ocean’s mercy.  Then she crashed down into the trough – breakers drenching the flying bridge, timbers creaking as if every nail would pop.  Of the thirty-four men on board – a few on watch, a few trying to sleep, and the rest?  I’ll tell you what they were doing: they were praying.  There were no atheists on that ship that day.

The Wow of religion frequently comes out of mortal danger. That’s the reverse of Jacob’s shock reaction to his dream.   It’s called foxhole religion.  It’s legitimate too.  It doesn’t happen to everyone.  Fortunately.

Even more fortunately, that sudden experience of wonder and excitement, that Wow, does happen to some of us.

And the conditioned commitment, the feeling of “Let’s go home again,” happens to large numbers of us.  It’s the hardest to deal with, because Tom Wolfe was right: you can’t go home again.  Not really. All you can do is reach back into your memory for the truths of home, the hope of home, the warmth of home. Try to recapture them where you are now.  And if you can’t recapture them, try to approximate them.

Bringing those qualities of your childhood home into your life today will probably require learning some things that may be new to you – even some things you made a point to forget.  Some Torah, some Minhagim – some ceremonies you sometimes laughed at, some of that old fashioned tradition that used to irritate you.  Maybe those things made home Home.

According to Rashi, Jacob spent 14 years in the Yeshiva of Shem and Ever before he ever went to Haran.  What he learned there is hard to imagine, since the Torah would not be received for five more centuries.  But what Rashi is telling us is valuable.  He is telling us that learning and applying the tradition of our homes prepares us for life’s most climactic moments – the “Wow” – and for life’s trials and yearnings – the “Take me back home to my father’s house.”  Our tradition can even prepare us to face the reality of the foxhole and the typhoon. 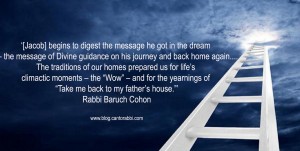