LOYALTY OR ELSE? by Rabbi Baruch Cohon

LOYALTY OR ELSE? by Rabbi Baruch Cohon

This week we will read a section called R’ey – “See” – in the Book of Deuteronomy chapters 11-16, comprising the second of Moses’ farewell speeches. He starts by telling his people: “See, I place before you today a blessing and a curse. The blessing if you follow G-d’s commandments that I give you, and the curse if you do not follow them but leave the path that I charged you to take.”

Moses implies a choice. We can opt for blessing, or we can go the other way. Does the Almighty just leave it to us? Indeed centuries later the great Rabbi Akiba stated simply: “All is foreseen, and free will is given.” G-d surely knows what we will do, but we are free to do it. Free will thus permits evil decisions, which this week’s commandments consider.

Among those commandments we find some warnings that we might call extreme. For example, how to treat a false prophet. How to react to a member of your own family who leaves the faith and invites you to come along. What to do about an entire city that decides to practice idolatry. In all such cases, the penalty is death.

Hardly sounds like a religion of love and justice, does it? It even reminds us of some current reports about fatal fatwas pronounced against prominent ex-Muslims. And who knows how many humble victims of similar fatwas we don’t hear about.

Torah commentators deal carefully with these commands to violence, as when Moses says “Your hand shall be first against him (the apostate) and finally the hand of all the people.” Rashi and others insist that the violator first had to stand trial, and only if found guilty would he be killed. Rabbi J. Hertz (former Chief Rabbi of England) points out that “Jewish history does not record a single instance of punishment for religious seduction by a false prophet or a member of one’s family.”

A similar case of Biblical justice applied – or not applied – concerns the pursuer. If you see one armed man chasing another man who is unarmed, and you assume the pursuer has murder in mind, it is your duty to stop him. But if the unarmed man runs inside a building and the pursuer follows him, and then the pursuer comes out the other side without his weapon, and you go in and find the fugitive dead and the weapon by his side? You have no case. It takes two eye witnesses to convict a murderer. You don’t know if the dead man wrestled the sword away from his attacker and then fell on it. You don’t know, so you cannot testify. And if there is no eye witness, there is no execution.

This type of case occurred a few years ago with the death of Israeli General Motta Gur, who was assumed to be a suicide. He died of a gunshot in his own back yard and was found with a pistol in his hand. Yet he received a funeral with all military honors. Some people asked how that could happen, when suicide is after all a terrible sin in Judaism. One answer detailed the law of two eye witnesses. Maybe someone jumped over the fence, killed Gur and placed the gun in his hand before escaping? Another answer, less legalistic, concerned his national value as an important leader in the Six Day War. No witnesses, so give him the benefit of the doubt.

Regarding a disloyal city, the Torah text itself warns the people who destroy that city to take no spoils. This is not to be a venture for profit. This is not the Inquisition which confiscated the property of its victims. And the Tosefta states: “The destruction of a whole community because of idolatry never occurred nor will it ever occur. The sole purpose of the warning is that it should be studied and one might receive a reward for such study.”

Study, indeed. If we studied our heritage more and understood it better, we might find ourselves more loyal to its message, and have fewer false prophets, fewer intimate seducers, and fewer rebel communities.

Perhaps we need to ask who are the real sufferers in cases of disloyalty to the faith and desertion from the community? Over and again we hear that while we lost 6 million in the Holocaust, we lost at least that many since then, to assimilation and conversion. Figures aside, we can see a decline in Jewish commitment and a weakening of interest in Jewish education. Given the advances in genetic science, we might predict a time when only your DNA will prove whether you have any connection to the Jewish people. Maybe the “idolaters” – or secularists or apostates or intermarrieds – among us are the real sufferers. And they don’t even know what they are missing – all the wonderful color and flavor of Jewish life.

They deprived themselves of the “blessing…if you follow the mitzvos that I command you today.”

No, no one will judge them and kill them. In fact, many of us stand ready to welcome them back. As the prophet Isaiah sang in this week’s Haftorah: “All your children shall be taught of the L-rd, and great shall be the peace of your children.” 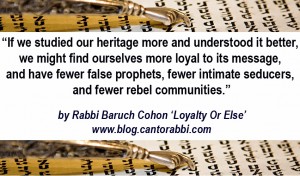 1 Response to LOYALTY OR ELSE? by Rabbi Baruch Cohon